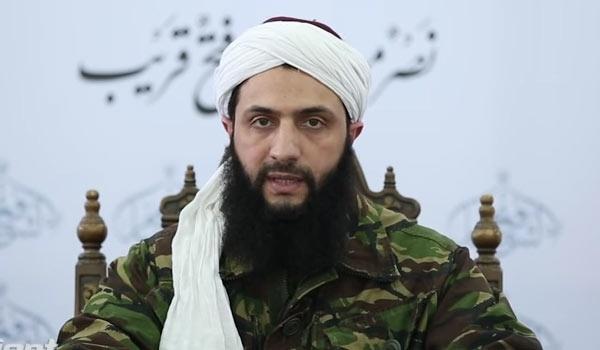 TEHRAN (FNA)- Ringleader of Tahrir al-Sham al-Hay’at (the Levant Liberation Board or the Al-Nusra Front) Abu Mohammed al-Jolani declared that his militants will not retreat from the demilitarized zone two days after ceasefire was declared in Northern Syria.

The pro-militant Smart News website quoted al-Jolani as saying that Tahrir al-Sham has no plans to withdraw from its military positions in Northwestern Syria.

Meantime, al-Jolani reiterated Tahrir al-Sham’s lack of commitment to Astana meeting, and claimed that the terrorist group will take military actions to retake the regions that it has recently lost to the Syrian Army.

Meantime, the Arabic-language al-Watan newspaper pointed to the violation of the ceasefire in Northern Syria by terrorists, and said that several civilians have been wounded in terrorists’ rocket attacks on Share al-Nil region in the city of Aleppo.

The Syrian Observatory for Human Rights (SOHR) underlined that the terrorist groups pounded the Syrian Army’s military positions in Tal Hawash in Sahl al-Ghab in Northwestern Hama and al-Qasabieh in Southern Idlib.

In a relevant development on Thursday, the Syrian army hit a heavy blow at Tahrir al-Sham terrorist group’s defense lines in the town of al-Latamineh in Northern Hama, forcing the militants to flee their most important headquarters in the region.

The Syrian army forces continued clashes with Tahrir al-Sham terrorists in the Eastern parts of the town of Tal Malah in Northern Hama on Thursday, retaking control of Wadi Hasmin region and the farms near the town of al-Zuka.

Meantime, a military source said that the Syrian army troops have regained control of Wadi Hasmin region, broken the first defense line of Tahrir al-Sham from al-Zuka and opened a new front towards the town of al-Latamineh as the militants’ key base in Northern Hama.

He added that a large number of terrorists were forced to flee al-Latamineh as the army is advancing in the region.

The source also said that a group of 17 militants were killed in clashes in al-Zakah, adding that the army forces targeted the terrorists’ supply lines in Hasraya and al-Arbaeen with artillery fire.

Meantime, the Syrian air force launched heavy attacks against the terrorists’ positions in al-Latamineh, Kafr Zita, Latmin and Dawir al-Akrad in Northern Hama, destroying several of their bases and military vehicles and killing the militants inside.