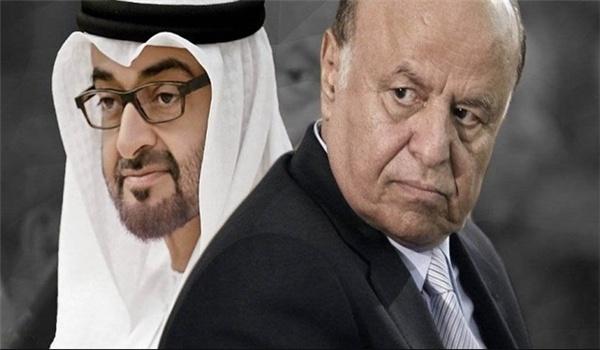 While Yemen’s ousted government has been for years backed by Saudi Arabia and the UAE, Abdullah said in a tweet on Saturday that the former rulers of Yemen are now in contact with Egypt’s Muslim Brotherhood, a group which is blacklisted by many Arab countries as a terrorist group.

He went on accusing the elements of former regime in Yemen as influenced by media propaganda of Qatar, adding that they are holding a secret grudge against the UAE.

They are after confronting the UAE and destructing all moves of Abu Dhabi in Yemen, Abdullah stressed.

His tweet came after Bloomberg reported on Thursday that Maeen Abdulmalik Saeed, prime minister of Yemen’s ousted regime, was disappointed with Abu Dhabi after his recent visit to the UAE.

The UAE seems to have started a U-turn in its regional polices after Iran’s tough warnings to Abu Dhabi about the dire consequences of the UAE’s destructive polices in the region.

The UAE was seriously criticized by Iran and warned of consequences after a US spy drone took off from an Emirati airport and intruded into Iran’s airspace on June 20. The Iranian air defense units shot down the American spy drone and lodged a complaint with the United Nations Security Council (UNSC).

Also on Saturday, a senior member of the Southern Transitional Council (STC) of Yemen, who spoke on the condition of anonymity, told Arabi21 news outlet that Senior Emirati officials have reassured Tehran that they will start a major shift in policy in Yemen’s Southern provinces and launch intelligence cooperation with Ansarullah Movement.

The UAE has recently reached an agreement with Iran and within the framework of the agreement has promised Tehran that it will shift the state of political affairs in the Southern provinces of Yemen, the STC source added.

He added that the military and political heads of the STC, which is backed by Abu Dhabi, are among those who will be targeted by the new revisionist polices of the UAE in accordance with the agreement with Tehran.

According to the same source, now disagreements and rivalries have intensified among different fractions within the council, specially between the party of ‎Aidarus al-Zoubaidi, who chairs the council, and the party of Ahmed Hamed Lamlas, the secretary general of the STC.

“One of the articles of the comprehensive agreement reached between Tehran and Abu Dhabi entails the UAE’s intelligence cooperation and coordination with Ansarullah Movement,” the source claimed.

On Tuesday, a maritime security delegation from the UAE arrived in Tehran to resume bilateral coast guard meetings between Iran and the Arab country after a 6-year hiatus, in a bid to increase joint efforts on enhancing maritime security in the Persian Gulf region.