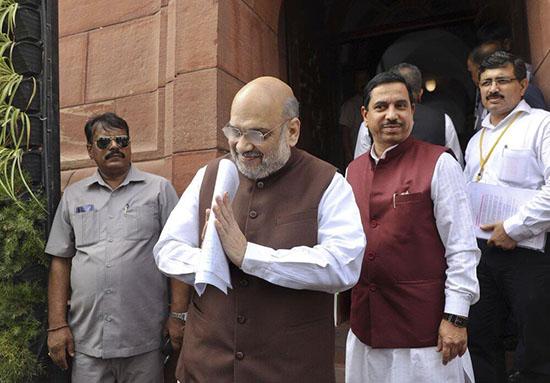 India’s government revoked disputed Kashmir’s special status by presidential order on Aug. 5 as thousands of newly deployed troops descended and some internet and phone services were suspended in the restive Himalayan region where most people oppose Indian rule.

Home Minister Amit Shah announced the revocation amid an uproar in India’s two houses of parliament and while Kashmir was under a security lockdown keeping thousands of people inside their homes and unable to communicate with the outside world.

Shah’s statement came after Prime Minister Narendra Modi convened a cabinet meeting and the government’s top-decision making body on security matters, the Cabinet Committee on Security which he heads.

The revoked law, Article 370 of the Constitution, gives Jammu and Kashmir its own constitution and decision-making rights for all matters except for defense, communications and foreign affairs. The law also forbids Indians outside the state from permanently settling, buying land, holding local government jobs and securing education scholarships.

Critics of India’s Hindu nationalist-led government see the move as a bid to dilute the demographics of Muslim-majority Kashmir with Hindu settlers.

According to a copy of the order, the revocation of Article 370 will “come into force at once” and will “supersede the Constitution.”

Despite the blackout on internet services, Jammu and Kashmir’s former chief minister, Mehbooba Mufi, tweeted that the government’s decision is “illegal” and “unconstitutional.”

“A historical wrong has been undone today,” he tweeted.

Regional parties in Jammu and Kashmir had earlier called attempts to revoke Article 370 an aggression against the people.

The law dates to 1927, when an order by the administration of the-then princely state of Jammu and Kashmir gave the state’s subjects exclusive hereditary rights. Two months after India won independence from British rule in August 1947, Maharaja Hari Singh, the ruler of Jammu and Kashmir, signed a Treaty of Accession for the state to join the rest of the union, formalized in Article 370 of the Indian constitution.

Further discussions culminated in the 1952 Delhi Agreement, a presidential order that extended Indian citizenship to the residents of the state but left the maharaja’s privileges for residents intact.

Late Sunday in Kashmir, government forces laid steel barricades and razor wire on roads and intersections to cut off neighborhoods in Srinagar, the region’s main city. The government issued a security order banning public meetings, rallies and movement and said schools would be closed.

Authorities also suspended internet services on cellphones, a common tactic to prevent anti-India demonstrations from being organized and to stop the dissemination of news.

The order affects about 7 million people living in the region.

The security deployment in recent days adds at least 10,000 soldiers and other forces in Kashmir, to what was already one of the world’s most militarized regions. India also had ordered thousands of tourists and Hindu pilgrims to leave the region.

Tensions also have soared along the Line of Control, the volatile, highly militarized frontier that divides Kashmir between India and Pakistan.

Indian firing along the Line of Control on Sunday wounded one woman, Pakistani police said. In Pakistani border villages, residents were moving to safer places or building and strengthening bunkers and shelters protecting them from cross-border fire.

Pakistan and India routinely blame each other for initiating border skirmishes.

Modi and his Hindu nationalist Bharatiya Janata Party won reelection early this year on a platform that included promises to do away with special rights for Kashmiris under India’s constitution.

At the Srinagar airport, hundreds of Indian and foreign visitors, including some Hindu pilgrims, congregated outside the main terminal, seeking seats on departing flights. Tourists and pilgrims also took buses out of the region, with authorities busing out hundreds of Indian students from Srinagar colleges.

Rebels in Indian-controlled Kashmir have been fighting Indian control since 1989. Most Kashmiris support the rebels’ demand that the territory be united either under Pakistani rule or as an independent country, while also participating in civilian street protests against Indian control. About 70,000 people have been killed in the uprising and the ensuing Indian crackdown.