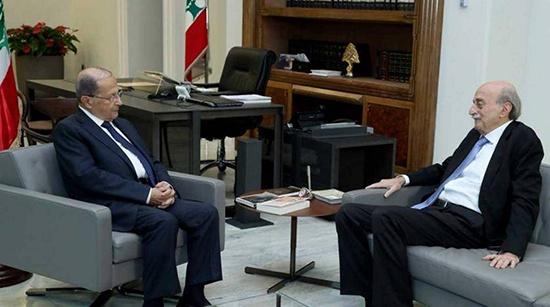 Prime Minister Saad Hariri, who solely has the authority to set a meeting, has shown restraint for fear of further division if a political agreement isn’t reached.

BEIRUT: With the government deadlock entering its second month, President Michel Aoun is still adamant on attempting to convene the Cabinet despite the lack of a political resolution to the conflict.

Prime Minister Saad Hariri, who solely has the authority to set a meeting, has shown restraint for fear of further division if a political agreement isn’t reached.

The premier had sought to forge a reconciliation between Progressive Socialist Party leader Walid Jumblatt and his Druze rival, Lebanese Democratic Party head Talal Arslan, but has seen his efforts flounder in the midst of increasing political bickering and infighting.

The conflict has pitted the Lebanese Democratic Party, Free Patriotic Movement and Hezbollah against the Progressive Socialist Party and its allies, the Lebanese Forces and Future Movement.

Arslan, along with the FPM and Hezbollah, has insisted on including the issue on the Cabinet’s agenda, which would be followed by a vote on whether to refer the case to the Judicial Council, Lebanon’s highest court tasked with taking on sensitive affairs. Jumblatt and his allies, however, continue to voice their rejection.

Voice recordings and confessions obtained during the investigation of 21 individuals show “detailed instructions, including ordering the use of weapons to block the convoy of Bassil from reaching Kfar Matta” on June 30, sources close to the president said.

“State Minister for Refugee Affairs Saleh al-Gharib can pass but others cannot,” a PSP leader told supporters, according to sources close to the president’s office, who have also stated that PSP affiliates in the region were supplied with “boxes of tomatoes and eggs,” believed to be code names for ammunition.

Following an investigation carried by out by Lebanon’s security agency, the case was then referred to the Military Tribunal which has filed complaints against 21 suspects.

Meanwhile, Jumblatt has attempted to cast doubt on the neutrality of the Military Tribunal, accusing the president of piling pressure on the judges presiding over the case and accusing his allies of fabricating evidence.

In response, sources close to the president have labeled this campaign as an attempt to “divert attention from what really happened in Qabr Shamoun and mislead the public.”

Jumblatt, who has feuded with both the President and his son in law and Free Patriotic Movement leader Gebran Bassil, held a meeting with European ambassadors and envoys over the weekend, with sources labeling the sit down as an attempt to gather support and political protection.

“Jumblatt is portraying himself as a victim who is being isolated,” sources said, accusing him of “doubling down on his stance and rejecting all initiatives that seek to solve the crisis.”

Lebanon’s government has been paralyzed since gunmen affiliated with the PSP opened fire on Gharib’s convoy in the village of Qabrshamoun, killing two of his bodyguards.

The convoy was clearing the way for Bassil, who was scheduled for a visit to the nearby village of Kafar Matta.