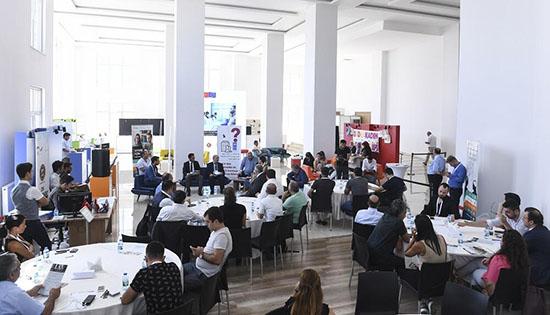 Turkish firms and Syrian jobseekers on July 31 gathered to talk business as part of a project kicked off by the European Union and the United Nations Development Program (UNDP). The project aims to strengthen the economic and social resilience of Turkish and Syrian people.

The two-day event took place in the southeastern province of Gaziantep with the attendance of many Turkish and Syrian people, mainly residing in the province, along with officials and authorities.

Following Istanbul, Gaziantep ranks second with its Syrian population, which is over 445,000, according to the July statistics of Turkey’s Migration Management Directorate.

The event commenced on July 30 with many workshops on numerous industries including textile, food, mechanics and plastic.

With the workshops, the event aims to pave way for Turkish people and Syrians to be involved in new markets, especially focused on exportation.

During the second day of the event, the participants held meetings, discussing their industries, skills and job opportunities.

A developer from Syria, who came to Turkey about five years ago and looks forward to find a job in the industry, told Hürriyet Daily News about his invention.

“I have four children. My wife is not working. Right now, I am not working and we are making ends meet with our savings,” Hadi Terkawi said.

He has developed a system which can produce any kind of mobile phone application, as long as one puts the idea in the system, he added.

One of the main problems’ Syrian jobseekers, or entrepreneurs, have is the lack of finances.

“Syrian people have trouble in receiving credits because they do not have a financial footprint,” an official from the HABITAT Association said.

“But this has nothing to do with them being Syrian. Banks would not give loans to anyone who does not have a financial footprint,” he added.

According to a 2019 UNDP report on the livelihoods of refugees in Turkey, the average salary of Syrians working in Turkey range from 756 Turkish Liras (around $135) to 1,343 Turkish Liras (roughly $242). In western or Central Anatolian provinces, 37 percent of Syrians are working part-time.

This figure is 56 percent in southern provinces, the report added.

The report also points out that 84 percent of refugee households in Turkey has a working family member, having either regular or irregular jobs.

The EU and UNDP commenced the Turkey Resilience Project in response to the Syria Crisis (TRP) in February 2018. The two-year project has a budget of 50 million euros and aims to help Syrians and Turks strengthen their ties, economically and socially.

The project’s objectives are to employ 2,000 Syrians and Turks and ensure the establishment of 250 new companies or joint ventures.

According to the UNDP report, only 8 percent of refugees have undergone language training upon their arrival and 11 percent can speak Turkish.

Nevertheless, from this 11 percent, only 3 percent of Syrians have an advanced level knowledge of Turkish.

“Four out of five respondents had only basic Turkish language skills,” the UNDP report asserted.

Turkey is one of the most generous countries regarding refugee population, as it hosts over 3.6 million registered Syrians under temporary protection.