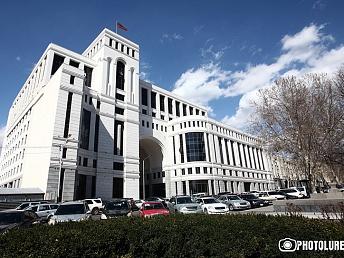 YEREVAN, August 7. /ARKA/. The Armenian ministry of foreign affairs, responding to a statement made by the Azerbaijani ministry of foreign affairs on Tuesday, said that the statement is “a stark demonstration of failure to adhere to basic rules of civility and decency, incapacity to sustain civilized norms of conduct between nations, especially amongst parties engaged at the highest level in highly complex and sensitive process of conflict resolution”.

It says that Armenia remains the only guarantor for the people of Nagorno-Karabakh in ensuring their security, their freedom and inalienable human rights, including the right to development and the right to self-determination.

It also says that Armenia regrets the incapacity of the authorities of Azerbaijan to understand the context and the content of the speech of Armenian Prime Minister Nikol Pashinyan of 5 August 2019, which addresses the pan-Armenian agenda of advancing unity, solidarity, development and prosperity for Armenia, Artsakh and Diaspora.

“Furthermore, the Prime Minister of Armenia has repeatedly stated that any viable option for the peaceful resolution of the Nagorno-Karabakh conflict should be acceptable to the peoples of Artsakh, Armenia and Azerbaijan.,” the Armenian foreign ministry says. “The authorities of Azerbaijan, however, have been consistently failing to reciprocate willingness and capacity for a solution acceptable to all parties. Azerbaijan continues to adhere to its maximalist demands, accompanied with the threat or use of force, consistently violates the ceasefire regime, defies the calls of the OSCE Minsk Group Co-Chairs to consolidate an atmosphere conducive to peace and reject any solution acceptable to all parties. Such positions are consistently reflected in statements of the leadership of Azerbaijan.”

The ministry says that position of Armenia with regard to the peaceful settlement remains unchanged, which is clearly reflected in the above-mentioned address of the prime minister of Armenia and that Armenia is resolute in achieving a strictly peaceful resolution of the conflict, rejecting any threat or use of force and defending the security of the people of both Armenia and Nagorno Karabakh.

Karabakh conflict broke out in 1988 when Karabakh, mainly populated by Armenians, declared its independence from Azerbaijan.

On December 10, 1991, a few days after the collapse of the Soviet Union, a referendum took place in Nagorno-Karabakh, and the majority of the population (99.89%) voted for secession from Azerbaijan.

Afterwards, large-scale military operations began. As a result, Azerbaijan lost control over Nagorno-Karabakh and the seven regions adjacent to it.

Some 30,000 people were killed in this war and about one million people fled their homes.
On May 12, 1994, the Bishkek cease-fire agreement put an end to the military operations.

Тalks brokered by OSCE Minsk Group are being held over peaceful settlement of the conflict. The group is co-chaired by USA, Russia and France.