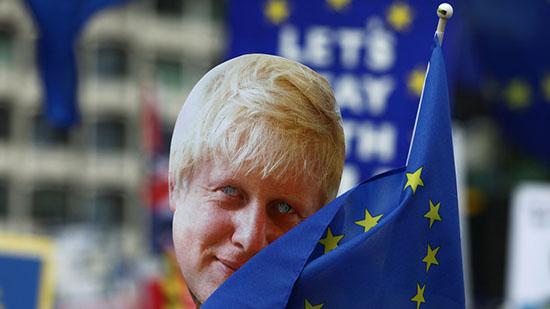 UK PM Boris Johnson’s approach to handling Brexit appears to be steering Britain towards a crash exit out of the EU, former and current Scottish leaders are warning.

Johnson’s proclaimed desire to secure Brexit smacks of “selling something that is not true” and crosses the fine line between “optimism and delusion,” Scottish First Minister Nicola Sturgeon said on Tuesday.

“He shrugs his shoulders quite literally when you talk to him about the consequences of crashing out at the end of October with no deal as if they don’t matter or he can wish them away,” Sturgeon told LBC radio’s Iain Dale on Tuesday.

Her predecessor, Alex Salmond, also believes Johnson is unconcerned with the potentially catastrophic no-deal Brexit. His handling of the process appears to be genuine, and not just “bluff and bluster” – yet given his turbulent nature, he might easily change his mind, Salmond told RT.

An increasing number of people think he actually means it. But then, of course, Boris has been known to change his mind about these things in the past and he may do so over the next few weeks.

His Brexit strategy might, however, be a trick – targeting the European Union rather than the Conservatives, to make Brussels “cave in” and secure a better deal for Britain. Unfortunately, this type of strategy is unlikely to work, said Salmond, who currently hosts a weekly show on RT.

Very few people seriously believe the European Union is going to back down from its position. They have completed the negotiations with Prime Minister May, Boris Johnson’s predecessor – that’s it, it’s not going to be reopened.

Johnson’s willingness for a no-deal Brexit might also be part of a plan to hold on to his post as prime minister, by driving supporters away from the true hardliners.

“The electoral logic for Boris Johnson is impeccable. He knows that in order to have any chance of sustaining his position as PM, he has to nullify the threat from Nigel Farage and the Brexit party. The only way he can do that is by adopting a hard line Brexit position,” Salmond believes.

If that is actually his strategy, it seems risky, Salmond added, warning that Johnson could easily become the shortest-serving PM in UK history – or even the one that loses Scotland if things go particularly bad.

Given the resounding ‘success’ of Johnson’s visit to Edinburgh last week – which caused a dramatic surge in support for the independence movement – what seemed impossible after 2014 is not looking so unlikely now.