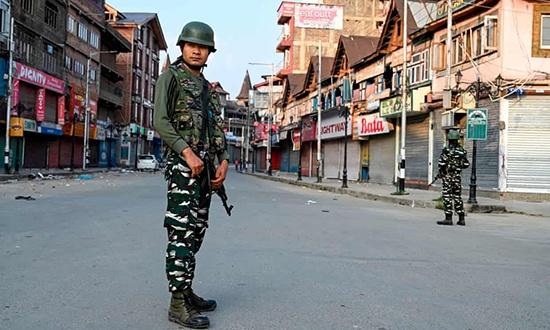 Rebecca Ratcliffe in Delhi  -The  Guardian

Pakistan has vowed to take any measure necessary to “stand by” people in Kashmir, where an unprecedented communications blackout continues a day after the Indian government said it would revoke the territory’s special status and divide it in two.

Landline connections, internet and mobile coverage in the territory were all suspended on Tuesday, while prominent political leaders who oppose the Indian government’s move were reportedly arrested.

At least six people have since been injured in protests, according to sources quoted by Agence France-Presse, with travellers returning from Srinagar, Kashmir’s biggest city, reporting that they heard gunfire and other weapons being fired.

The Indian government announced on Monday that it would drastically change Kashmir’s relationship with Delhi, removing the autonomy that the territory was granted in exchange for joining the Indian union after independence in 1947. It also said it would divide the state of Jammu and Kashmir in two.

The announcement prompted anger from Pakistan, which also claims Kashmir and has fought two wars with India over the territory. “Pakistan army firmly stands by the Kashmiris in their just struggle to the very end,” the country’s army chief, Gen Qamar Javed Bajwa, said. “We are prepared and shall go to any extent to fulfil our obligations in this regard.”

The contested region is divided between India, which controls Kashmir Valley and the Hindu-dominated region around Jammu city, Pakistan, which controls territory in the west, and China, which holds a thinly populated area in the north.

On Monday, Washington called for calm along the border that divides Kashmir between Pakistan and India.

The US state department also expressed concern at reports that politicians had been detained and urged “discussion with those in affected communities”, while Human Rights Watch pressed the security forces to act with restraint.

“Considering previous violations by troops, including excessive use of force against protesters, and the lack of accountability despite allegations of torture and extrajudicial killings, we hope that the government will ask security forces to be rights-respecting,” said Meenakshi Ganguly, South Asia director for Human Rights Watch.

One man, who asked not to be named, said he was travelling back to Srinagar from Delhi on Tuesday, because he was concerned about his family. His father, a businessman who is involved with a small civil society group, had been detained, he said.

“I have always identified myself as an Indian but today I am ashamed of that identity,” he said. He has not been able to contact his relatives since the order revoking Kashmir’s special status was announced on Monday.

Another man, who returned to Delhi on Tuesday, told AFP that he heard intermittent gunfire and other weapons being fired, soldiers shouting during the night, and saw government troops deployed “every five steps”.

Sanna Wani, a Kashmiri poet, said on Twitter said that, with heavy security and a curfew, even people citing medical emergencies were unable to get past checkpoints. “Next to us, a man holding his brother’s X-rays, was begging to be let through to take his brother to surgery scheduled for today. Another woman, desperately needing to refill her child’s medicine. None of them were allowed to get through.”

Two former chief ministers, Mehbooba Mufti and Omar Abdullah, as well as Sajjad Lone, the chairman of the People’s Conference party, have reportedly been arrested.

Gauhar Siraj, who left Kashmir on Monday night, said that while access to main roads was blocked on Monday morning, at point people could be seen talking on the streets in residential areas, where teenagers were playing cricket.

“People were not scared though. They [said]: We’ve seen everything that they can do so what is it they can do now?”

“The curfew is there, the forces are out on the streets, barricades, the works,” he added.

Following a visit to Kashmir, the national security adviser, Ajit Doval, was quoted by Indian media saying that the situation was normal and that there was “no agitation”. But the communications blackout has prevented independent reporting on the situation in the territory.

Critics say the blackout suggests the ruling Bharatiya Janata party (BJP) fears the announcement will provoke unrest in Kashmir, where an insurgency against Indian rule has continued for three decades.

The territory has held special status since 1954. Under article 370, it was given its own constitution, a flag, and autonomy over all matters except for foreign affairs and defence. An additional provision, article 35a, has prevented people from outside the state buying land in the territory. Many Kashmiris believe this is crucial to protecting the demography of India’s only Muslim-majority state, as well as its traditions and way of life.

The BJP argues that such provisions were always intended to be temporary, and that the changes would bring prosperity to Kashmir. The home minister, Amit Shah, said: “We will make Jammu and Kashmir the most developed state in the country … I want to tell the youth that have faith in Narendra Modi government. Nothing negative will happen,” the Indian Express reported.

On Tuesday, the proposals were passed in the Indian parliament.

The party has been accused of pandering to its Hindu nationalist support base, of ignoring the will of the Kashmiri people and disrespecting the constitution. Others condemned the manner in which the government made the announcement, which was preceded by a buildup of troops in Kashmir and a dramatic order calling for the evacuation thousands of tourists and pilgrims.

Rahul Gandhi, until recently the head of the main opposition Congress party, accused the BJP of acting in a way that is undemocratic. “This abuse of executive power has grave implications for our national security,” he said on Twitter.