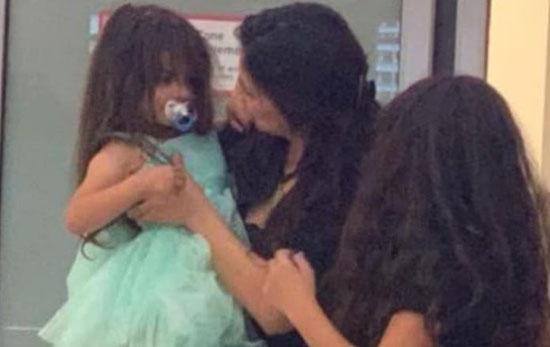 Turkish journalist Arzu Yıldız, who had to flee Turkey in 2016 to avoid a still-ongoing persecution of journalists critical of the government, has been reunited with her daughter, who was seven months old when she left Turkey

Yıldız, an outspoken journalist, had to leave Turkey due to a number of cases filed against her concerning reports she wrote that apparently disturbed the Turkish government. In one case she was handed down a prison sentence of 20 months, in May 2016, due to a report about trucks allegedly belonging to the Turkish intelligence service that in 2014 transferred weapons to radical groups in Syria.

Yıldız was one of hundreds of journalists who decided to flee Turkey as the Turkish government launched a massive crackdown on critical journalists and media outlets in the aftermath of a failed coup attempt on July 15, 2016.

The journalist, who divorced her husband and left her two daughters in Turkey, wrote about her feelings and her daughter’s reaction when they met in Canada, where Yıldız is currently living in exile, three years after she left Turkey.

Yıldız wrote when she last saw her daughter before leaving the country, she was crawling and had a pacifier in her mouth, and that when they met three years later she still had a pacifier, was shy and behaved as if she was meeting a stranger.

The journalist said on their first night after being reunited, they slept together and that her daughter woke up in the middle of the night and began to kick her, saying she wanted her grandfather, who took care of her when she was in Turkey.

“During the three years I have spent here, I always wondered if I would be able to see my daughter again, who was seven months old when I left Turkey. A person should cling to life no matter what happens; I did not want to leave the story of a weak and ill mother as a legacy until the moment a pacifier I saw while walking on a bridge startled me. I cried on that bridge for hours holding that pacifier. It would have been easy to jump off the bridge. When a person has nothing to lose, they don’t get scared. But I don’t want to leave this world like a coward. What can a mother who gave in to such an impulse leave behind?” wrote Yıldız.

The journalist was able to reunite with her elder daughter two years after she left Turkey.

Yıldız said it has been 10 days since was reunited with her younger daughter, but she isn’t completely happy, thinking of other parents who were separated from their children.

There are in excess of 17,000 women in Turkish prisons, with some 800 children accompanying them. These women are among the more than 30,000 people who were jailed in Turkey on terrorism charges in the aftermath of the coup attempt due to their alleged links to the Gülen movement.