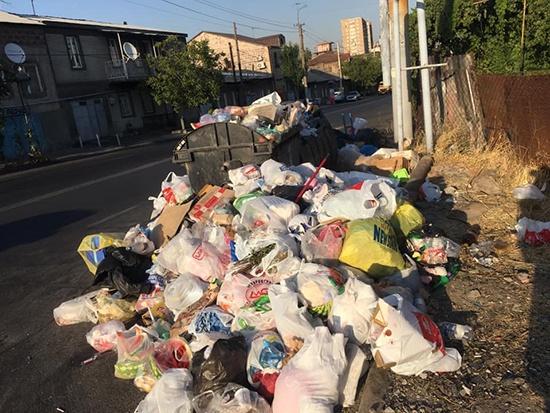 In a recent poll, Armenians identified trash collection as the top problem their communities face.

Long-running complaints about poor trash collection have reached crisis proportions this steamy summer in Armenia’s capital, and the city’s garbage contractor is in a politically tinged fight with the authorities.

Yerevan residents have been taking to social media to vent, posting pictures – and tagging city officials – of uncollected trash piling up in the heat, which has lately been hitting 40 degrees Celsius (104 Fahrenheit). “Today it is 10 days since the garbage has been collected,” wrote Anuk Mkrtchyan, a journalist at RFE/RL, on her Facebook page on August 5 next to a photo of five overflowing trash receptacles. “The smell of the street is indescribable.”

The investigative website Hetq posted its own photo of piles of garbage and asked users to send theirs. “I see [Prime Minister Nikol] Pashinyan keeps telling diaspora Armenians to return,” one user commented. “How can we return to this, literally garbage?! Shame on them for not figuring out how to properly handle trash. It’s been 23 years since I left the country, this was an issue then and [it’s] still an issue now.”

Complaints about poor collection started emerging last summer. The city’s mayor, an ally of Prime Minister Nikol Pashinyan, campaigned in last September’s election in part on a promise to deal with the trash problem: in the first shot of one campaign video, he stood next to piles over overflowing trash and said, “We will clean it up.”

But the problems have not been solved. A recent poll by the International Republican Institute (IRI) found that Armenians, asked what was the biggest problem in their town or village, most often answered “garbage collection.”

Yerevan city authorities and the private company with the contract to collect the trash, Lebanon-based Sanitek, have been blaming one another for the problems.

City authorities repeatedly fined Sanitek and have hinted that they may break the contract with the company, signed in 2014 for a 12-year term. “We will clean up Yerevan with or without Sanitek,” Mayor Hayk Marutyan told an August 2 press conference. That followed a July 30 announcement from the State Revenue Committee that it had opened a criminal investigation against Sanitek for tax evasion. The municipality also has been spending additional funds to buy additional garbage trucks.

Sanitek, meanwhile, has complained that it is being unfairly scapegoated and inaccurately tied to the former authorities.

Also on August 2, Sanitek’s director Nicholas El Tawil held a press conference – originally scheduled in Tbilisi, for unclear reasons, then carried out by videoconferencing – in which he complained that the company was the victim of politics. “2018 was a critical period for the company, followed by a revolution, and because garbage was a visible issue, Sanitek became a target for the political campaign,” he said. “It was also used to make this look like a deal between the former city authorities and company shareholders.”

The legal cases against the company were politically motivated, Tawil said: “The authorities set a goal to financially weaken the company with the aim of its subsequent expropriation.”

Meanwhile, the trash has continued to pile up. Anna Kostanyan, a member of parliament from the opposition Bright Armenia party, posted photos of piled-up trash near her home on August 5, calling it “stinking” and “intolerable.” She said the situation had become so extreme that neighborhood children had made a joke of it. “They are calling people over, saying ‘come and see our beautiful sights!’”