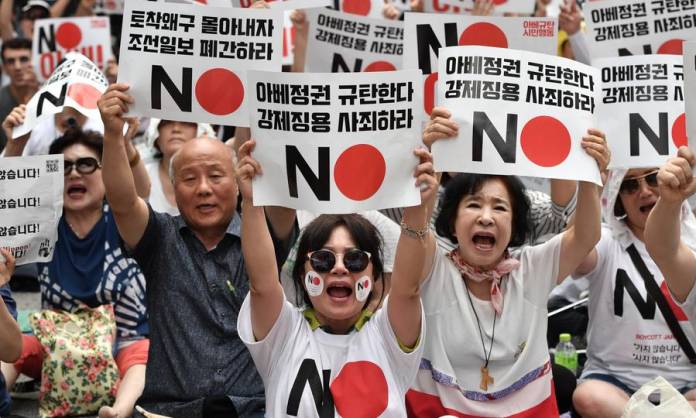 Tokyo’s move to export key chemical used for chip manufacturing seen as step back from the brink.

By Andrew Salmon and Lee Shin-hyung

The Japanese government has permitted the export to South Korea of a key chemical required for semiconductor manufacturing – the first approval granted since Tokyo tightened export restrictions on three strategic materials on July 4.

Last month’s move raised fears about production stoppages impacting the global electronics supply chain and plunged Seoul-Tokyo relations into what was seen as their worst crisis since diplomatic relations were established in 1965.

It was unclear whether Thursday’s development would cool the simmering emotions that have been marked, in South Korea, by political and media fury, demonstrations, Japanese product boycotts and even protest suicides.

Tempers have been cooler in Tokyo, but even so, the dispute there has been marked by some unusually blunt language by Japanese officials toward South Korea.

Japan’s trade ministry on Thursday permitted the shipment of extreme ultraviolet (EUV) photoresist, also known as resist, one of the three chemicals whose exports terms had been tightened.

Commenting on the move, Hiroshige Seko, Japan’s trade minister, said Japan “will not misuse” its export curbs. The release of the material was confirmed by South Korea Prime Minister Lee Nak-yon during an inter-agency meeting on Thursday morning, according to Yonhap news agency.

But Lee offered no information on the supply of two other key materials, fluorinated polyimides and hydrogen fluoride. According to Japanese media, a Japanese company which applied to export hydrogen fluoride to a South Korean partner in mid-July was still awaiting approval.

“The biggest burden on the economy is uncertainty,” Lee said, calling the Japanese export restrictions “unjustifiable.” Still, he said he was determined to resolve the ongoing issue diplomatically.

President Moon Jae-in remained hard line when he referenced the situation during a subsequent address to a policy advisory body, the Citizens Economic Advisory Council.

“We have to see how far Japan will go with this,” Moon said, according to a text of his speech sent to foreign reporters. “But it has taken just one action so far, and this is not good for our economy or our people.”

Noting that each country has core economic competencies, he warned Japan against “weaponizing” its leading-edge sectors. “Eventually, Japan will lose international credibility and Japanese companies will suffer from loss of demand,” he said, adding that there could be “no winner.”

When Tokyo placed export controls on three potentially dual-use materials last month, it was widely assumed in South Korea that the move was a de facto embargo on goods needed by its flagship industrial sector, electronics.

However, a source familiar with the Japanese position assured Asia Times last week that Tokyo’s action was, in fact, simply the imposition of export controls over potentially dual-use materials. Thursday’s move by Tokyo would appear to confirm that.

Yet even if the Japanese curbs allow shipments to move, a 90-day approval process will continue to place a major red tape burden on companies, and sources in Korea urged caution.

“Japan’s approval to export photoresist seems to be a move to justify its claim that [export restrictions are] not a measure to ban exports,” Kim Kyu-pan, a senior researcher at the Korea Institute for International Economic Policy, told Asia Times. “Japan’s move needs to be monitored further.

“We cannot guarantee that imports of strategic materials from Japan will come smoothly in the future. There is still a lot of uncertainty, but Japan has not resolved this uncertainty. We have to wait and see more of Japan’s moves.”

Seoul’s analysis of Japan’s imposition of export controls – which was referenced in Moon’s speech on Thursday morning – is that they are retaliation against a South Korean Supreme Court decision to seize the assets of Japanese firms operating in South Korea in order to compensate wartime forced laborers.

Tokyo’s position is that the forced labor issue had been resolved in 1965, when a diplomatic relations treaty was signed and a related financial compensation package delivered.

The dispute over the legal decision remains unresolved and with only one of the three key materials so far released, it was not clear whether public anger would be assuaged.

Emotions are expected to peak in Seoul with a major demonstration called on August 15. That was the date of Japan’s World War II surrender, which ended three and a half decades of Japanese colonial rule over the Korean peninsula.

Seoul has since announced a major financial package to help companies self-source the necessary materials and has also announced plans to assist companies source them from exporters outside Japan. The efficacy of these measures – particularly when it comes to filling gaps in short-term supply – is murky.

Affected companies – notably leading semiconductor manufacturers Samsung and SK Hynix – have kept tight-lipped about their efforts to find non-Japanese sources of the materials, though Samsung has announced it was not cutting back on production.

Seoul was further infuriated last Friday when Tokyo expanded its export curbs beyond the three chemicals by announcing the removal of South Korea from a “white list” of trusted export destinations for more than 1,000 products. Seoul retaliated the same day, removing Japan from its own white list.

The tit for tat actions have worried observers, who fear a trade war could be pending between the two Northeast Asia manufacturing powerhouses and US allies.