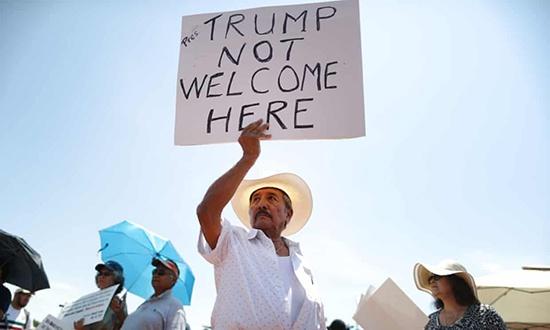 President faces protests as he spends day at sites of mass shootings in Texas and Dayton, Ohio

Miguel de Anda, born and raised in El Paso, at a protest against in El Paso on the day Donald Trump arrived. Photograph: Mario Tama/Getty Images

Donald Trump arrived in El Paso, Texas, on Wednesday afternoon to pay tribute to the victims of one of the deadliest mass shootings in recent US history.

But the president was met with calls to stay away, as hundreds of residents gathered in the city’s Washington Park, mere streets from the US-Mexico border, to denounce him. With much of the president’s own rhetoric reflected in the El Paso shooter’s anti-immigrant and racist manifesto, many felt that the visit was throwing salt into the wound of a binational, largely Latinx community in mourning.

“The first thing out of his mouth better be an apology,” said David Stout, the county commissioner of El Paso. “I doubt it will be.”

Standing under the sweltering sun, protesters held signs reading “Trump is a racist” and “Protect our kids, not the NRA”. Volunteers passed out water and registered people to vote.

“Today, we must come together and say, Donald Trump, your racism, your hatred, your bigotry are not welcome here,” Adri Perez of the El Paso ACLU said to the crowd. “We must turn our grief into anger and our anger into action.”

The mood was somber yet resolute. Some got choked up when talking about the shooting, but joined in strong when the crowd broke out in chants of “Go away, Trump” and “send him back”.

“We’re grieving,” said Barbara Canchola, 74. “We won’t want a photo-op with him. He doesn’t get how he contributed to all this.”

Trump and the first lady, Melania Trump, arrived in El Paso from Dayton, Ohio, where they had visited some of the victims injured in Sunday’s attack in that city.

The president was kept out of view of the reporters traveling with him, but Stephanie Grisham, the White House press secretary, said the couple met with hospital staff and first responders and spent time with wounded survivors and their families.

Trump told them he was “with them”, she said. “Everybody received him very warmly. Everybody was very, very excited to see him.”

But outside the Miami Valley hospital in Dayton, too, at least 200 protesters had gathered, blaming Trump’s incendiary rhetoric for inflaming political and racial tensions in the country and demanding action on gun control.

Trump, however, largely celebrated the day of visits as a success. “Leaving El Paso for the White House,” he tweeted Wednesday evening. “What GREAT people I met there and in Dayton, Ohio. The Fake News worked overtime trying to disparage me and the two trips, but it just didn’t work. The love, respect & enthusiasm were there for all to see. They have been through so much. Sad!”

Trump’s visits to the two cities come in the wake of back-to-back massacres that have left at least 31 dead and 50 injured.

Earlier on Wednesday, Trump brushed off claims that his words and actions were contributing to violence. “No, I don’t think my rhetoric has at all. I think my rhetoric brings people together,” Trump said, while dismissing the criticism as an attempt by his opponents to score “political points”.

In El Paso, local politicians say much of the community is living in fear in the wake of the attack and the growing threat of white nationalism.

“People are afraid to be Hispanic,” said Cassandra Hernandez, a city council representative, ahead of Trump’s arrival. She had spent the morning speaking to her constituents, the overwhelming majority of whom are “upset and angry” about the president’s visit.

“He is not welcome,” she said. “It’s mixed feelings from everybody. Some are not happy with Trump, but want to show him their compassion and love, and show him that his words matter. Others are just outright outraged because he has not apologized to this city, to people of Mexican heritage.”

The protest rally saw appearances by notable politicians including the current congresswoman representing the city, Veronica Escobar, and the former congressman Beto O’Rourke.

“El Paso chooses to restore our faith in humanity and in this country, and I could not be more proud,” he said to cheers.

But O’Rourke leveled harsh criticism at the president in a later interview with MSNBC, calling Trump a white supremacist who had “sought to dehumanize those who do not look like or pray the like majority here in this country”.

Community members at the rally also waved signs reading “$569,204” and chanted “Trump needs to pay”, making clear that they had not forgiven Trump for the public safety expenses he still owes the city of El Paso from his February campaign rally.

“It’s unconscionable that he can’t be bothered to pay back a debt that he owes from months back and then expects us to open our arms to him and welcome him,” Stout said. “This is not a wealthy community. The people here are hardworking working-class folks that pay their taxes. The money he owes the city is money he owes the people of this community.”

El Paso is a Democratic stronghold in a Republican state, but Trump has some supporters in the city as well. Alexsandra Annello, a city representative, has received some messages from constituents “saying you should welcome the president, that this isn’t about politics”.

“But this is about politics,” she said. “A week after this, he is going to turn around and start with the same racist rhetoric? He has put this community at risk since he’s been in office and he has never apologized for it and I don’t see it happening.”

The attack – as well as a recent shooting in Gilroy, California – is being investigated as domestic terrorism. On Wednesday, it also emerged that El Paso suspect’s mother had contacted police weeks before the rampage out of concern that her son had a rifle. Attorneys for the family told the Associated Press the mother was only seeking information and was not motivated by a concern that her son was a threat to anybody.