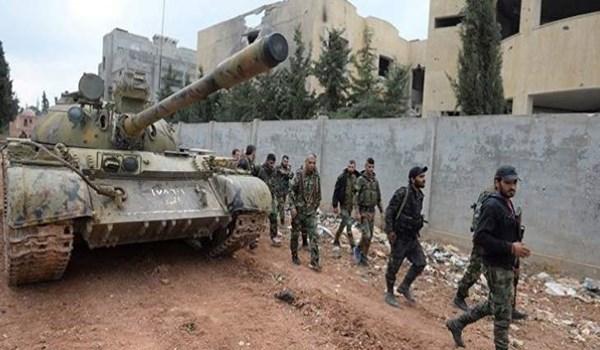 TEHRAN (FNA)- The Syrian Army arrived in the so-called ‘Death Triangle’ after it gained control of several strategic regions and as the government forces resumed their military operations in Northern Hama, inflicting heavy losses on militants.

The Syrian Army troops, backed by the artillery, missile and aerial support, engaged in fierce clashes with the terrorists in Northern Hama and took control of the strategic al-Arbaeen town, al-Ban farms and hilltop as well as the entire hilltops near the al-Arbaeen, killing a sum of 45 militants.

The Syrian Army troops also continued their clashes with the terrorists after gaining control of al-Arbaeen town and regained control of al-Zuka town in the ‘Death Triangle’ region which is the most important base of Jeish al-Izzeh terrorists.

A military source, meantime, pointed to the high death toll of the terrorists in operations to liberate al-Zuka region, and said that the terrorists fled several towns, including Kafar Zita, al-Latamineh, Mourek and Latmin as Syrian Army made further advances.

The source said that the Syrian Army troops have secured their military control over Kafar Zita and al-Latamineh which are the main bases of Jeish al-Izzeh after gaining control of al-Zuka region.

In a relevant development on Monday, the Syrian Army warded off the terrorist groups’ attacks on the government forces’ military positions in Northern Hama and Southern Idlib.

The Arabic-language al-Watan newspaper quoted battlefield sources as saying that the terrorist groups stationed in the demilitarized zone in Northern Syria launched rocket attacks on the Syrian Army’s military points in Kharbeh al-Naqous and al-Hakoureh in Sahl al-Ghab in Northwestern Hama and violated the ceasefire for the third consecutive day.

The sources noted that a large number of terrorists were killed and wounded in the Syrian Army’s artillery and missile attacks on their military positions, while the rest of the militants were forced to retreat from their positions.

In a relevant development last Thursday, the Syrian army hit a heavy blow at Tahrir al-Sham terrorist group’s defense lines in the town of al-Latamineh in Northern Hama, forcing the militants to flee their most important headquarters in the region.

The Syrian army forces continued clashes with Tahrir al-Sham terrorists in the Eastern parts of the town of Tal Malah in Northern Hama on Thursday, retaking control of Wadi Hasmin region and the farms near the town of al-Zuka.

Meantime, a military source said that the Syrian army troops have regained control of Wadi Hasmin region, broken the first defense line of Tahrir al-Sham from al-Zuka and opened a new front towards the town of al-Latamineh as the militants’ key base in Northern Hama.

He added that a large number of terrorists were forced to flee al-Latamineh as the army is advancing in the region.

The source also said that a group of 17 militants were killed in clashes in al-Zuka, adding that the army forces targeted the terrorists’ supply lines in Hasraya and al-Arbaeen with artillery fire.

Meantime, the Syrian air force launched heavy attacks against the terrorists’ positions in al-Latamineh, Kafr Zita, Latmin and Dawir al-Akrad in Northern Hama, destroying several of their bases and military vehicles and killing the militants inside.