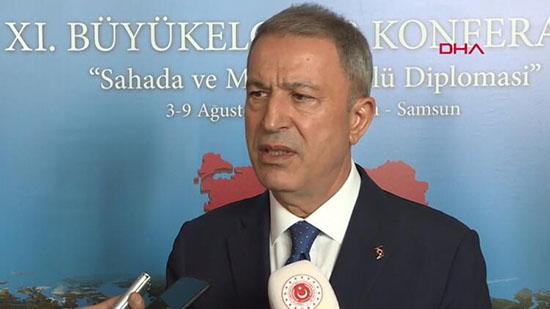 Turkish and U.S. military officials have agreed that the safe–zone in northern Syria will be a “peace corridor” for displaced Syrians longing to return home, the Turkish National Defense Ministry said on Aug. 7.

“Talks between Turkish and the U.S. military delegations regarding establishment of a safezone in the north of Syria were concluded,” the ministry said in a joint statement with U.S. delegation.

“The delegations agreed on the rapid implementation of initial measures to address Turkey’s security concerns, to set up as soon as possible a joint operations center in Turkeyto coordinate and manage the establishment of the safe zone together and that the safe zoneshall become a peace corridor, and that any additional measures shall be taken for our displaced Syrian brothers to return to their country,” the statement added.

Turkish Defense Minister Hulusi Akar said on Aug. 7 that talks with the United States aimed at averting a Turkish military intervention into northern Syria had been “positive,” according to state news agency Anadolu.

“We witnessed with satisfaction that our partners grew closer to our position. The meetings were positive and quite constructive,” Akar was quoted as saying as the talks in Ankara entered a third day.

During talks that began on Aug. 5, Turkey raised all of its security concerns and exchanged views with our interlocutors, the defense minister told reporters.

Underlining that the meetings were positive and constructive, Akar said: “We gladly observed that our interlocutors approached our views on the Syria safe zone.”

“Our plans on the Syria safe zone and the deployment of our troops in the field have been completed,” he said. Turkey wants to cooperate with the U.S. if the two governments can find common ground in talks, he added.

“We would prefer to act together with our American ally. If that isn’t possible, we have said multiple times that we will do what is necessary,” Akar said.

YPG/PKK is the Syrian offshoot of terror group PKK, which has been responsible for the deaths of nearly 40,000 people in Turkey, including many children, women, and infants, for more than 30 years.

Turkey has often raised concerns over U.S. support of factions of the PKK against ISIL in the region, saying one terror outfit cannot be used against another.