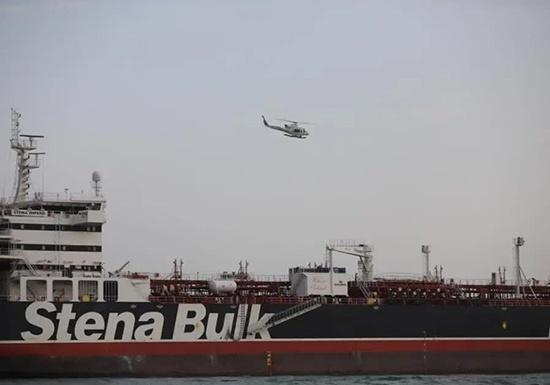 Ships in the area have reported spoofed communications from “unknown entities falsely claiming to be US or coalition warships.”

The US Department of Transportation warned commercial shipping companies on Wednesday about a list of Iranian threats in the Straits of Hormuz and the Persian Gulf, including GPS interference and communications jamming, CNN reported.

The warning listed a series of incidents involving the Islamic republic since May, including the detention of the British-flagged M/V Stena Impero and the detention and release of the Liberian-flagged M/V Mesdar.

During “at least two” of the recent encounters with Iranian military forces, “vessels reported GPS interference. One vessel reportedly shut off its Automatic Identification System before it was seized, complicating response efforts.”

The Stena Impero “turned off its tracker and ignored several warnings by the [Iranian Revolutionary] Guards before being captured,” an unnamed military source told Iran’s state news agency IRNA, according to Reuters.

Ships in the area have also reported spoofed communications from “unknown entities falsely claiming to be US or coalition warships,” according to the warning.

Iran has placed GPS jammers on the Iranian Abu Musa Island, located in the Persian Gulf near the entrance to the Strait of Hormuz, said a US defense official to CNN.

The jammers were placed at that location in order to disrupt civilian aircraft and ship navigation systems. Iran hoped that ships or planes would mistakenly wander into Iranian waters or airspace due to the GPS malfunctions, which would give Iranian forces the pretext needed to seize them.

According to the official, the jammers have no effect on US military warships and aircraft.

In July, British media reported that the British intelligence services MI6 and GCHQ were concerned that Iran had used Russian GPS spoofing technology to send the Stena Impero off course into Iranian waters.

“Russia has the technology to spoof GPS and may have helped Iran in this venture as it was extremely brazen,” said an anonymous security source in a report published by the Daily Mail. “It would make British shipping extremely vulnerable and will be of grave concern to Royal Navy warships in the region.”

In June, the Israeli Airports Authority announced that commercial airline pilots were having difficulty landing, and were experiencing mysterious disruptions.

Senior Israeli officials said that they believe that Russia had been disrupting civilian aircraft navigation systems, according to reports. Army Radio called the move a “hostile attack.”

According to the Israeli Airline Pilots Association, the GPS issues were part of a “spoofing” attack, causing receivers on planes to sometimes report their location as kilometers away from their actual location, reported CNN.

A report by the US Center for Advanced Defense Studies in April documented over 10,000 separate incidents of GPS disruption connected to Russia, adding that the country was “pioneering” the technique to “protect and promote its strategic interests.”

Russia has denied the report.

To resolve the issue, Israel sent a defense official to Russia to discuss the disruption, Army Radio reported.

Iranian military vessels have also been “spoofing” the automatic identification system used by merchant ships to report and disguise their vessels as merchant ships instead of Iranian Revolutionary Guard Corps or Iranian Navy vessels, according to CNN.

Iran’s Fars news agency said the IRGC had taken control of the Stena Impero on Friday after the tanker collided with an Iranian fishing boat whose distress call it ignored.

The vessel, carrying no cargo, was taken to the Iranian port of Bandar Abbas. Its 23 crew members – 18 of them Indians – are expected to remain there while the accident is investigated, Iranian news agencies quoted the head of Ports and Maritime Organization in southern Hormozgan province, Allahmorad Afifipour, as saying.

The Strait of Hormuz, between Iran and the Arabian Peninsula, is the major outlet for exports of most Middle Eastern oil, and the seizure sent oil prices sharply higher. The United States, which tightened sanctions against Iran in May with the aim of halting its oil exports altogether, has been warning for months of an Iranian threat to shipping in the strait.

Reuters and Yonah Jeremy Bob contributed to this report.