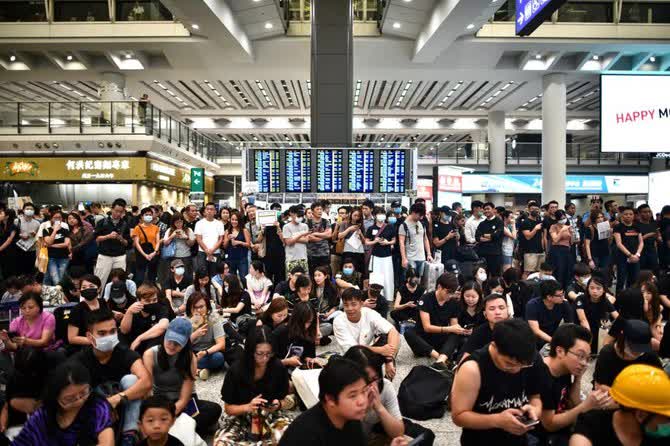 HONG KONG: Pro-democracy activists kicked off three days of rallies at Hong Kong’s airport on Friday, hoping to win international support from arriving passengers as the protests that have rocked the city enter a third month.
The rallies, promoted on social media with a mock boarding pass reading “HK to freedom” and “warm pick-up to guests to HK,” will be the second time protesters have brought their message to the international travel hub.
The gatherings, expected to run over three days, have not been authorized, but the last demonstration at the airport passed off peacefully without causing flight disruptions.
The protests that began in opposition to a plan to allow extradition to mainland China have morphed into a broader movement seeking to reverse a slide in freedoms in the city.
Demonstrators have staged protests throughout Hong Kong and held rallies for families, older people, lawyers and civil servants, in a bid to show their demands have broad and enduring support.
They have announced a series of marches and protests across the city over the weekend, including a “families’ rally.”
Extra security measures have been put in place at the airport ahead of the rallies, with authorities preventing anyone without a boarding pass from entering the check-in area. The protesters are expected to congregate in the arrivals area.
Hong Kong’s Airport Authority said Thursday it was aware of the planned rallies but “the airport will operate normally.”
Thousands of Hong Kongers, including flight attendants, rallied at the airport on July 26 to “educate” visitors about the protests that have gripped the international finance hub.
Visitors were greeted by a sea of black-clad protesters chanting anti-government slogans, holding banners and handing out flyers — the information desk plastered in a tapestry of colorful sticky notes.
The weeks of demonstrations pose the biggest threat to Beijing’s authority since Hong Kong’s handover from the British in 1997.
And as protests have become increasingly violent, several countries have upgraded their travel warnings for Hong Kong, with Washington this week urging its citizens to “exercise increased caution.”