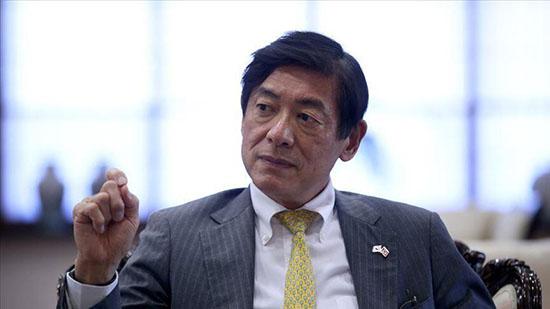 Japan is set to award Turkey‘s foreign minister with the “Grand Cordon of the Order of the Rising Sun” for his work in improving bilateral relations between the two countries.

Japanese envoy to Ankara, Akio Miyajima, told Anadolu Agency that Mevlüt Çavuşoğlu was fascinated in Japanese culture and could speak the country’s language, drawing respect among Japanese officials during the latter’s diplomatic visits.

“I consider myself lucky to be a Japanese ambassador in a country whose foreign minister has in-depth knowledge about Japan and speaks Japanese,” Miyajima said.

Stressing that Grand Cordon of the Order of the Rising Sun is the most prestigious award Japan gives foreigners, he added that Çavuşoğlu deserved it for bringing Turkey and Japanever closer.

Miyajima noted that any person awarded the cordon had to be over 50 years old. With Çavuşoğlu having marked his 50th birthday in 2018, he became eligible for the award.

“Turks, by nature, are friendly and good towards foreigners, but this attitude is even better towards the Japanese people, I’m happy for that,” he said.

Miyajima pointed out that Çavuşoğlu became the first person to earn this award since start of Reiwa era of Japan.

Adnan Menderes and Fatin Rustu Zorlu, former prime minister and foreign minister of Turkey respectively, were given Grand Cordon of the Order of the Rising Sun in 1958, becoming the first Turks to receive such award from Japan, according to Miyajima.

He said political relations between Ankara and Tokyo had recently deepened and that Japanese Princess Akiko of Mikasa’s visit to Turkey in 2018 improved bilateral ties.

Noting that Turkish President Recep Tayyip Erdoğan, accompanied by Çavuşoğlu, visited Japan for the G20 Leaders Summit in Osaka last June, Miyajima said Erdogan was expected to visit Japan for the second time this year for the new emperor’s accession to the throne.

Japan marks 2019 as the Year of Turkish Culture. Turkey, with the collaboration of Japanese officials, organized exhibitions at various parts of Japan to increase interest towards the country.