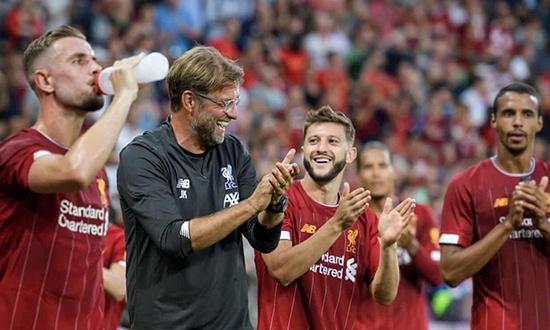 Jürgen Klopp is not worried about his squad despite a lack of major signings this summer. Photograph: Fabrice Coffrini/AFP/Getty Images

Jürgen Klopp believes Liverpool will improve this season without new signings and 98 points may not be required to win the Premier League given increased competition among the leading pack.

Norwich City’s visit to Anfield on Friday represents Liverpool’s deadline day, according to their manager, who signed only one senior player on the back of winning the Champions League and that was a second-choice goalkeeper in Adrián. Klopp admitted Liverpool tried to strengthen but could not land targets who would enhance his European champions for a reasonable price. However, he remains confident the squad at his disposal has the capacity to continue improving and challenge Manchester City for the title once again.

“Around 90% of our people are with us on the transfer policy and 10% maybe not, but they are on social media and they are constantly worried people,” claimed the Liverpool manager, who has Sadio Mané available for the Premier League opener. “This team is a good age with space for improvement. If we had found the solution for problems we might have during the season we would have done it. It was not there for a reasonable price. Nobody should think we did not look. It is not that we are not negotiating like crazy in these times, but finding the right solution is more difficult the better the team gets. I really think it makes sense to keep this team together but we have to prove that.

“We have to make our decisions based on our expectations of what we think we can do this year. By the way, the history of Liverpool does not end this season. We will judge the season and see what we have to do. Maybe then it will be easier to find improvement.”

Klopp’s confidence is fuelled by having a stable core of young talent at Liverpool, the impact of winning the club’s sixth European crown and the second-half performance against City in last weekend’s Community Shield.

He said: “The big teams of the past – and I don’t say we are a big team now, that will be decided in a couple of years – they stay together for a number of years. They do not need a lot of changes. I am not comparing us with Barcelona of five, six or seven years ago but they stayed together. A new player came in and struggled and so it was the same players who played again. Man United had the class of ’92. How long did they stay together? They changed a few after [Eric] Cantona got older and brought in Van the Man [Ruud van Nistelrooy] or whoever. You do not change completely.

“We are a good team together in a very difficult league with a lot of competitors desperate to get the position we are in. Nobody knows how it will look exactly but Sunday showed we will be fine and the rest is what we make of it.”

The Liverpool manager believes it is “important you don’t compare seasons” and is wary of claiming his team can emulate or improve on last season’s 97 points, a club-record haul that still was not enough to secure a first league title since 1990. But given the spending at Tottenham, Arsenal and Manchester United, and Frank Lampard’s arrival at Chelsea, he expects a more condensed title race this season.

Klopp said: “For me, it looks like this season will be different because there was a big gap between the other teams and us and City. It looks like we will all be closer to each other than last season. If that is the case then you cannot get 97 or 98 points. We don’t know in this moment. The only thing we know is that nothing will happen for us in a positive direction if we don’t win our games. We have to start with that on Friday. Friday for us is deadline day because pre-season is over and now we have to perform as good as possible.

“A season has a story, and there are different chapters, but without a first word you cannot start. We start our story on Friday and there is no reason why it should not be a wonderful story.”