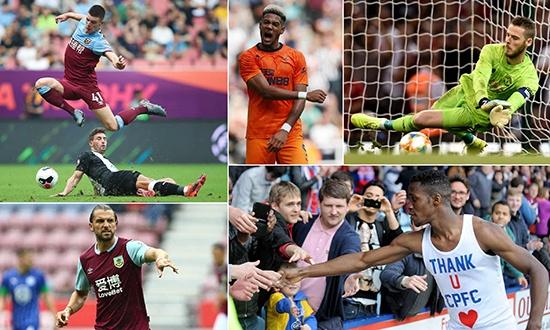 1) A flurry of attacking full-backs at Anfield

While there is plenty of excitement to be drawn from Liverpool’s much-lauded front three, a good argument could be made that the two most thrilling players in Jürgen Klopp’s side are defenders. Technically, anyway. In reality, Trent Alexander-Arnold and Andy Robertson spent last season making a mockery of their job descriptions, zooming forward with exuberant abandon and each laying on more goals than any of the side’s so-called attackers. Meanwhile, down in the Championship, a similar operation was in progress. Norwich’s full-back duo, Jamal Lewis and Max Aarons, are under strict instructions from Daniel Farke to play with the handbrake permanently off and duly raised pulses at Carrow Road, clocking up 10 assists between them with Lewis being named the EFL young player of the season. In theory, that could spell good news for Sadio Mané and Mo Salah on Friday night: Liverpool’s chief goal threats should not be short of vacant space to exploit on their respective flanks. But either way, with so many tireless shuttlers on show, proceedings at Anfield may look less like a football match than an Olympic swimming contest. AH

2) Hammers can make a statement against champions

Manuel Pellegrini: a quietly dignified purveyor of easy-on-the-eye football and unheralded soother of post-relocation turbulence, or a crusty charisma vacuum happy to sit back and collect a late-career paycheck? West Ham: a youthfully promising attacking outfit that could trouble the top six, or a pick-and-mix squad stocked with and managed by journeymen, fated for a late-season dogfight they don’t have the mettle for? A year into Pellegrini’s reign in east London, both questions remain strangely unanswered, though Saturday’s lunchtime kick-off may give us a better idea of what lies ahead. Because while the visit of the champions may be read as a “free hit” for West Ham in terms of the result, the manner of their performance will speak volumes: a meek surrender will confirm the worst fears of an angsty home crowd and remind the world that Pellegrini’s biggest job in England was as a placeholder for Pep Guardiola. A bolshy, in-your-face display, however – maybe even a goal or two – would send a much-needed message that last season’s top-half finish is there to be built on. With a small army of silky playmakers, one of the country’s best young players in Declan Rice and a shiny new £45m goalscorer in Sébastien Haller, Pellegrini has a squad of undoubted talent. He also has plenty of naysayers. Making good use of the former would make fools of the latter. AH

3 ) A potential best-of-the-rest treat at the King Power?

With Arsenal, Chelsea, and Manchester United looking vulnerable, the teams below them will feel that they have a chance to penetrate the fabled battle for the top fourTM. Wolves and Leicester both look decently equipped for the task, with settled sides, exciting individuals and canny managers. Last season, both sides acquitted themselves well against the teams who finished above them, and there is no reason to think that should change; but what does need to change is their performances when they’re expected to win. Leicester lost home games to Cardiff, Crystal Palace and Newcastle, while Wolves were beaten by Palace, Cardiff, and Huddersfield twice.Also important is the momentum of a good start, and the fixtures computer has ensured that this will be difficult for both; Leicester play Chelsea second, while Wolves meet Manchester United. But first of all they must struggle with one another in what promises to be a fascinating match-up: Leicester look to move the ball quickly, attacking at pace and in numbers, while Wolves play a slower, possession-based style, probing for holes before exploding. Each is well equipped to punish the weaknesses of the other, which is to say that Saturday’s match makes for one of the best of the weekend. DH

4) Welbeck can reassert talents at Watford

There are certain players who look to have pretty much every attribute required to be a top player … except for the one intangible thing that makes top players top players, and Danny Welbeck is one. He has a lovely touch, an engaging imagination, work ethic, pace and physical presence, but struggles to put it all together often enough to wring the most from his talent. At 28 years old, he still has time – just – and at Watford should get the chance to play through the middle regularly. Though his reputation is as a bad finisher, unreliable is a more accurate description – he can make difficult chances look easy, just as he can make easy chances look difficult. If he can only compose in front of goal, and if injuries can only leave him in peace, he could be an excellent addition to an already useful Watford side. DH

5) Zaha to be taken out of the Selhurst firing line?

Slapping in a transfer request the day before the window closes is a high stakes game to play, and Wilfried Zaha must now pay the consequences of losing his fight to leave Selhurst Park. That Saturday’s opponent is the very club he pushed tojoin only compounds the discomfort. It seems likely that Roy Hodgson will take his star player out of the firing line having sent Zaha home from training on Thursday as the winger’s hope of an exit turned to dust. “When you sign long-term contracts you are expected to honour them and we expect him to do that,” Hodgson said as the deal collapsed, and pointedly. Should Zaha be at Selhurst in the capacity of player or spectator, he can see what he might have been part of. Everton have been busy in the market, with Alex Iwobi the final signing of a raft of additions of whom Moise Kean most captures the imagination. JB

6) A happy homecoming for Rodriguez?

Jay Rodriguez is back at his hometown club and poised to make his first Premier League appearance for Burnley on Saturday. The 30-year-old had a productive spell for West Brom and merits another shot at the big time, and he rejoins a club in a reasonably buoyant mood after a strong finish to a hitherto underwhelming 2018-19 season. Rodriguez’s two-goal display in a friendly win over Parma last weekend bodes well for the Clarets. How Rodriguez fits into an attacking unit that has been spearheaded by the settled pairing of Chris Wood and Ashley Barnes will be one point of tactical intrigue. The loan signing of 2016’s Danny Drinkwater is another interesting addition. Southampton should arrive at Turf Moor in good spirits too. Ralph Hasenhüttl has generally coaxed brighter, sparkier performances from Saints since his arrival last December, and has recruited well over the summer. Arrivals such as Che Adams and Moussa Djenepo promise much and they, like their opponents on Saturday, can go into their season-opener with legitimate aspirations of a top-half finish. TD

7) No Dybala but there is fresh blood for Pochettino

In the first Saturday evening serving of the Premier League, transfer deadline day’s headline makers in Tottenham welcome the entire window’s most active operators in Aston Villa. Minds may still fixate on those who did not arrive or did not get their wish to leave. Paulo Dybala will not, after all, be unveiled on the pitch and get to test out the Tottenham Stadium’s unrivalled executive facilities. Instead, Spurs fans can satisfy themselves with first glimpses of Giovani Lo Celso, Ryan Sessegnon, and Tanguy Ndombele. Meanwhile, the likes of Danny Rose, Christian Eriksen and Toby Alderweireld remain Tottenham players, barring continental escapes with the European window open until the end of the month; Eriksen had his heart especially set on leaving. Mauricio Pochettino has the new blood he was agitating for but still appears well short of the resources to challenge Manchester City or Liverpool. For Villa, though, who signed 13 players this summer, Spurs still represent a supreme test for a freshly promoted club. JB

Is this the real beginning of Arsenal’s new era? Their summer activity would suggest it and, at the least, the feeling around Unai Emery’s squad is significantly fresher than the drab bunch he inherited 12 months ago. St James’ Park does not seem similarly awash with the joys of late summer so this should be a good opportunity to put those good vibes to the test. If Andy Carroll is paraded in front of the Newcastle fans then local spirits might be raised a touch and the £40m signing Joelinton will fancy a crack at Arsenal’s defence on his competitive debut. Steve Bruce could do with a good start and if the Magpies are grasping for omens then they could cast their minds back to the last time these clubs faced off on the opening day, in 2011. Back then Gervinho was sent off on his Arsenal debut; by coincidence another Ivorian winger, Nicolas Pépé, should make his bow at the same venue and at the very least Bruce will need to keep the prolific attacker quiet. NA

9) De Gea has amends to make against Chelsea

Manchester United’s draw at home to Chelsea in April was the nadir of a difficult season for David de Gea, whose mistake gave Marcos Alonso the equaliser. It was the culmination of the toughest spell of de Gea’s career, and at the end of the season he lost his place in the Spain team to Chelsea’s Kepa. If Ole Gunnar Solskjær is to improve Manchester United this season, he needs De Gea in the kind of form that makes pundits swoon. It was almost certainly a blip, the kind all keepers experience, but Sunday’s match against Chelsea at Old Trafford will give us an insight into De Gea’s confidence levels – and the first clue as to whether DDG is still Dead Dead Good, or whether, given the memories of April’s meeting, and the presence of Kepa in the opposition goal, he will not struggle for motivation. RS

Saturday will be a strange day for Lys Mousset. He will go to the Vitality Stadium as usual but this time he will walk into the away dressing room with his new club Sheffield United. It will be an equally odd sensation if, at 3pm, he walks on to the field rather than towards the dugout. Mousset was a regular substitute at Bournemouth, and the last time he started a Premier League game at the Vitality Stadium was March 2018. It never quite worked out on the South Coast, in part because of the excellence of Callum Wilson and Josh King. But Mousset has oodles of potential, and most of the raw materials any striker would want. And, like his new club, he has the opportunity to prove people wrong this season. If Sheffield United are to confound snooty assumptions and avoid relegation, Mousset could play a big part. RS