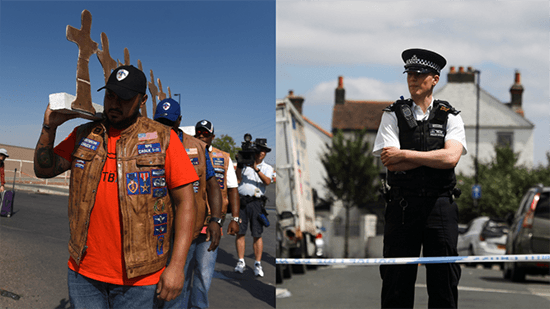 Whether administered by the knife or the gun, the UK and US are both experiencing epidemics of violence. However, the responses are the same on each side of the Atlantic: lots of finger pointing and few actual solutions.

In the US, a pair of deadly mass shootings in Texas and Ohio killed more than 30 people over one weekend. These attacks brought to 255 the number of mass shootings in the US so far this year. Although the definition used here is a broad one and includes minor incidents with no deaths, the fact remains that 8,930 people have been killed with firearms in the US so far in 2019.

Across the Atlantic, the UK is grappling with an epidemic of its own. A routine traffic stop in London on Wednesday night turned bloody when a driver turned on police officers and allegedly hacked them with a machete, an incident becoming more familiar to the city’s law enforcement officers.

This surge in knife crime saw London’s murder rate overtake that of New York last year, while across England and Wales, 43,516 knife crime offenses were recorded in the 12 months ending March 2019. 67 people have been murdered in London in the first six months of this year and, according to statistics released in May, five young people are attacked with a knife every day in the British capital.

In both countries, politicians have been accused of doing nothing. US President Donald Trump has been bashed by Democrats for refusing to push for tough gun control legislation, while London Mayor Sadiq Khan has been accused of ignoring the rise in knife crime, often singled out by Trump himself.

Politicians and pundits have found plenty of scapegoats to blame, though. Both Trump and Democratic Party frontrunner Joe Biden blamed “gruesome and grisly”  –Trump’s words– video games for the Ohio attacker’s radicalization, despite the fact that no study exists showing a causal link between games and actual, real-life violence.

In a throwback to the ‘Satanic Panic’ of the 1980s, Buzzfeed and Vice questioned the Ohio shooter’s fondness for “pornogrind” metal music, while one state politician blamed“drag queen advocates,” and “homosexual marriage” for Connor Betts’ rampage.

In Britain, violent ‘Drill Rap’ music has been blamed. A menacing iteration of rap in which artists threaten each other in music videos, the rise of drill rap has been inextricable from London’s soaring crime rate. Last week, an 18-year-old drill rapper was jailed for at least 19 years for stabbing a 15-year-old boy to death outside a London chicken shop last year, his fifth knife crime conviction.

While the courts have actually banned certain drill rappers from making music, the stabbings continue. Debating the issue in parliament, MPs have suggested everything from fitting every knife sold in Britain with a tracking device, to bluntingevery kitchen knife in a bid to curb stabbings.

While these proposals may seem like a bizarre mirror to the gun control debate in the US, the end result would likely be the same.

Several landmark gun control bills have passed in the US since mass shootings peaked in the early 1990s, yet gun violence continues. The Federal Assault Weapons Ban of 1994 did nothing to stop the Columbine massacre, nor did the Brady Handgun Violence Prevention Act of 1993. Meanwhile, while the media and gun-control advocates obsess over restricting “military style” weapons like the AR-15 rifle, handguns are by far the most commonly used gun in all shootings across America, including mass shootings. Likewise, background check laws like the Brady Act matter little to criminals, as legally obtained guns are used in less than one-fifth of all gun crimes in America.

Ignoring those at risk

Against the seemingly impossible task of curbing the violence, there is one solution that nobody in either country seems to have tried: talking to the young men most often responsible for the murders.

In the US, a Secret Service report last year found that the average mass shooter is white, male, and has a history of mental illness. While the nation’s homicide victims and perpetrators are disproportionately black overall, mass shooters are usually white, and their crimes have lately been painted as a manifestation of a latent white supremacy culture. In the case of the Texas shooting, the gunman published an anti-immigrant manifesto online before the shooting.

Every time they turn on the TV or read a newspaper, America’s disaffected young whites face a media overtly hostile to them. Whether it’s thinkpieces calling every aspect of white culture “racist,” accusing four-year-old children of perpetuatingwhite supremacy, or university professors declaring white people “cancer,” these young white men –already grappling with rising rates of suicide and opioid addiction– are not getting the help they might need.

In Britain, the colors are reversed. GQ writer and youth worker Ciaran Thapar found that, in London, the black youth most at risk of criminality feel frustrated that government experts don’t listen to them. “We need people who know about the psychology of a kid when they go down a bad path,” one 17-year-old told him. “Someone who really understands that and who represents our experiences.”

Before his murder at the end of a knife last August, drill rapper Siddique Kamara, more widely-known on social media by his stage name Incognito, had laid the blame for the city’s soaring knife crime rate at the government’s feet.

“You can bring out youth clubs, you can invest money into other things to help the community, but you don’t want to do that, you just want to use an excuse – it’s drill music, it’s black boy drill music,”  he said in a June interview.

“No. How about you go and invest money? You go and make some youth centres. Invest money, go and make a new 4G [football] pitch in the area, and then you will see what progress will happen.”

One solution nobody is interested in: listen to the kids. London’s knife epidemic is a teenage one, but nobody listens. Mass shootings in the US are followed every time with a media barrage condemning the white, male ‘deplorables’ responsible, but nobody stops to ask these white men how they’re doing.

Graham Dockery is a journalist based in Ireland.