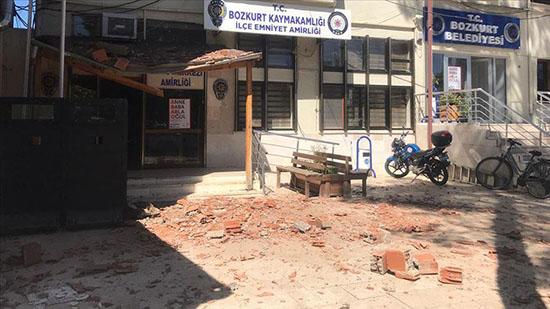 An earthquake with an estimated magnitude of 6.0 hit southwestern Turkey on Aug. 8, damaging homes and causing some injuries.

Turkey’s Disaster and Emergency Management Presidency (AFAD) said the quake in the province of Denizli had a preliminary magnitude of 6.0 and was felt in the neighboring provinces of Antalya, Mugla, Isparta and Burdur, where people also ran out of their homes.

“There have been damages on some houses in the Kızılören village in Dazkırı district. No report of demolished houses has come from the district governor’s offices,” said Mehmet Boztepe, the governor of the western Denizli province.

“Two citizens were slightly injured due to collapsing chimneys,” added Boztepe, who heads the crisis desk in the province.

The U.S. Geological Studies Institute put the magnitude of the earthquake at 5.8, whereas Boğaziçi University’s Kandilli Observatory revised its initial measurement of 6.5 down to 5.7.

The earthquake was recorded in the province of Denizli near the district of Bozkurt at 2.25 a.m. local time (11.25 GMT), with a depth of around seven kilometers, according to Turkish emergency services.

“No one was killed. There were no serious injuries,” he added.

Turkey lies on major fault lines and has suffered several quakes in the west and southwest of magnitudes 5 and above since the start of the year.

The country is about to mark 20 years since the devastating twin quakes in 1999, both over magnitude-7, that hit a highly populated zone in the country’s northwest, leaving some 20,000 dead.