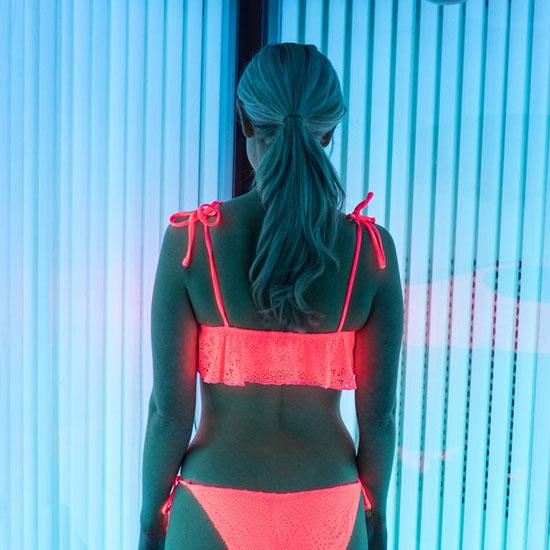 We look at the safety concerns associated with sunbeds and the truth about skin cancer risk.

If you’re frustrated by the British weather and long for a bronzed look, you might be tempted to try a sunbed to get a tan. But statistics show that non-melanoma and malignant melanoma are the most commonly diagnosed cancers in the UK, so are tanning beds really worth the risk? Consultant dermatologist Dr Daniel Glass from The Dermatology Clinic London gives us the lowdown on sunbeds and skin safety:

How do sunbeds work?

Sunbeds are designed to induce tanning by increasing the skin’s production of pigment or melanin. The type of UVB light emitted from a sunbed is similar to the wavelength of light that leads to redness and sunburn.

You never know how much UV you’re getting from a sunbed as radiation levels can be poorly regulated.

The risks of sunbeds

A paper published in the BMJ in 2012 summarised the findings of 27 previous studies and showed almost twice the risk of melanoma in those people who had ever used a sunbed before 35 years of age.

Those who’d used sunbeds had almost 7 times higher risk of developing melanoma than those who hadn’t.

The number of sessions of sunbed use is also important in determining skin cancer risk. An Australian paper looking at people who had used sunbeds on more than 10 occasions showed those people under 30 years old had almost 7 times higher risk of developing melanoma than people who hadn’t used sunbeds at all.

A recent study of almost 30000 Swedish women showed those who had used ever sunbeds had a 20 per cent increase in risk of squamous cell carcinoma, which is the second commonest skin cancer.

Are there any benefits of sunbeds?

There is no case for additional UVR exposure from sunbeds as they significantly add to the risk of developing melanoma.

Sunbed use is often unregulated and the beneficial effects of vitamin D can be readily obtained from 10 minutes of natural sun light, or vitamin D supplementation in the winter time.

Who should avoid sunbeds?

Sunbed use is not advisable for anyone. Some countries such as Brazil and Australia, have banned commercial sunbed use. Many countries like the UK have issued guidelines and laws to restrict sunbed use, especially in those under 18 years of age, and discussion continues about a complete ban in the UK.