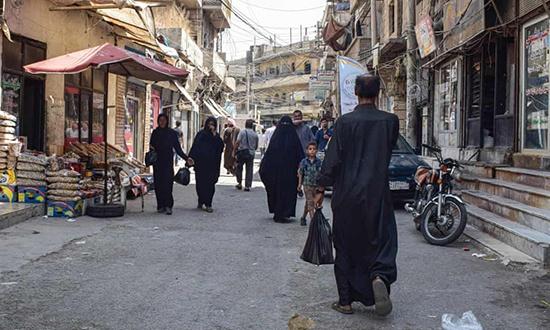 People walk along an alley in the northern Syrian flashpoint city of Manbij. Photograph: -/AFP/Getty Images

The announcement by Turkey and the US that they will set up a safe zone in Kurdish-run north-eastern Syria allays fears of an imminent Turkish incursion into the country, but will strain Washington’s ties with a force that helped defeat Islamic State.

The announcement came as Ankara was finalising a troop buildup along its southern border, which it shares with Syrian Kurds. On Sunday, the Turkish president, Recep Tayyip Erdoğan, had threatened to invade within the next fortnight, creating a conundrum for Washington, which views both the Turks and the Kurds as allies and has increasingly struggled to keep them from conflict.

Though light on detail, the agreement suggests that a safe zone inside the Kurdish north-east would be jointly run by Turkish and US forces. No specifics were offered on the route that such a corridor might take or how deep it would extend into Syria. The lack of clarity led some observers to claim the US was buying time and was not committed to a plan that could seriously test its already faltering ties with the region’s Kurds.

“It’s basically an agreement to continue talking,” said a former US official. “That’s a net good. But with Trump having no commitment to Syria, and our forces now cut to the bone, there is little we can really do to support a safe zone. So it’s a lot of wishful thinking.”

Turkey suggested it would use the newly established zone to return Syrian refugees inside its borders whom officials have started rounding up and returning to Syria in recent weeks. Senior Kurdish officials said such moves would amount to demographically reshaping a border that is dominated by Kurds and which Ankara wants to transform into an Arab stronghold.

“We are aware of the Turkish government’s intention, which is to change the demography of Syria just as the Ba’ath regime did in the 60s by building the Arab belt,” said Jihad Omar, the co-chair of the Office of Diplomatic Relations in the Syrian Democratic Council. “It is something we stand against because it is a genocide against the Kurds.

“Turkey is trying to repeat the same scenario of Afrin [a north-western Syrian town that was a Kurdish stronghold until a Turkish incursion in January last year]. The Turkish government’s Kurdophobia is in the core of its policies.”

The announcement also failed to shed light on any implications for two large detention camps and two prisons which hold more than 130,000 suspected Isis members or supporters – the remnants of the collapsed so-called “caliphate” which regarded north-east Syria as a centre of gravity until its battlefield defeat this year.

The fate of the facilities had been of deep concern to regional and western states during the Turkish buildup, and senior diplomatic sources suggested the bilateral deal may have been struck to temper such fears.

Though Isis no longer controls territory, there are strong and growing concerns that the organisation is using the camps to regroup and regenerate. Senior western officials had worried that Isis members could attempt an organised breakout, if Kurdish forces guarding them had been distracted by a war with the Turks.

For much of the Syrian war, Turkey had been a full-throated supporter of the anti-Assad opposition, arming some insurgent groups and offering shelter to up to 4 million Syrians who had fled the fighting. However, over the past 18 months, its interests have narrowed and it now aims to shape the dying phase of the eight-year conflict along nationalist lines.

Ankara’s first priority is to try to ensure that Kurdish groups, which are allied to the Kurdistan Workers’ party (PKK), with which it continues to fight a four-decade-long insurgency inside its borders, do not emerge emboldened.

Turkey insists Kurdish leaders with whom the US allied to fight Isis, under the banner of the Syrian Democratic Forces (SDF), are ideologically and militarily allied to the PKK.

“The fundamental issue is that the US supports the SDF, a group that Turkey views as a terrorist organisation,” said Aaron Stein, director of the Middle East programme at the Foreign Policy Research Institute. “The statement does not reconcile this fundamental issue, nor does it address a core divergence over how deep any zone would be. These remain to be resolved and, quite frankly, I don’t see how to do that.”

A second issue for Ankara is Syrian refugees, whose fate has become a lightning rod for leaders on both sides of a divided political spectrum. “The refugee issue is fast nearing a tip-over in Turkey,” said Soner Cagaptay, the director of the Turkish programme at the Washington Institute. He said the impact of refugees on Turkish society could not be overestimated, adding: “It’s the most significant demographic shift since the Greek/Turkish exchange of the 1920s.

“Southern Turkey has become 10 to 15% Syrian, and with the economy slowing down resentment towards refugees is rising.

“Erdoğan is therefore very eager to have this issue go away. He’s pressing hard for the safe zone, not just to undermine the YPG and the establishment of a PKK-allied state there but also to relocate a large number of refugees back to Syria. The statement out of the US embassy is significant: it shows that both sides have consensus on that.”

Stein suggested “potential violations of international law could hinder implementation” of any forced refugee returns. The Syrian Democratic Council’s Omar said any influx of Arab Syrians would not be tolerated.

“Our position has been very clear from the first day: any advance of Turkish forces and its allied armed groups into Syria is unacceptable. The recent agreement between the US and Turkey to build a new safe zone won’t change our position.”