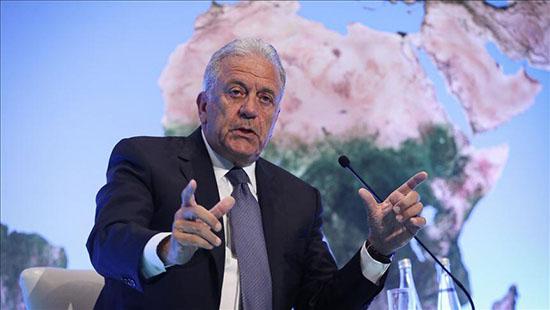 Turkey should always keep its head turned towards Europe as a “key regional power,” EUCommissioner for Migration, Internal Affairs and Citizenship Dimitris Avramopoulos has said.

“Over the past five years as EU commissioner, I experienced first-hand the importance of the EU–Turkey political and diplomatic cooperation, and I have seen the difficulties coming from misconceptions, prejudices,” Avramopoulos said on Aug. 8 at an Ambassadors’ Conference in Ankara.

“We gather here in a place and country, located geopolitically, historically and culturally at the crossroads of east and west, north and south,” he said and stressed Turkey is not only a land and sea-bridge linking south-eastern-most Europe with south-western-most Asia.

The country is a political, economic and cultural gateway between two continents: A historical highway around which empires and civilizations flourished, great wars were fought, and international diplomacy thrived, the commissioner noted.

Turkey and Europe are inevitably bound to each other by geography, history and shared interests, the commissioner said. “It is important that Turkey remains on a stable path towards Europe.”

Recalling several challenges that the world faces today around the globe, Avramopoulos said in these turbulent times, the EU remains a unique peace project in the history of humankind, built on these very foundations of multilateralism, and always investing in cooperation and partnerships to minimize the common challenges and maximize the shared opportunities.

“In this context, Turkey as a candidate country for EU membership is an indispensable partner and will always be a strategically important neighbor for the European Union. This is a bond which is made inevitable by geography. It is a bond cemented by history. And a bond which will always be strengthened by our mutual interests,” he added. “That is why Turkey, as a key regional power, should always keep its head turned towards Europe,” the commissioner said.

The management of migratory flows coming from Syria but also Afghanistan or elsewhere has required joint measures that have yielded results in Turkey and in Europe, he stated. The commissioner asserted that Turkey continues to be confronted with heavy migratory challenges. “That is why our close cooperation must and will continue,” he added.

He underlined that terrorism is a threat that does not stop at any national border. Citing the foreign terrorist fighters that travelled to Iraq and Syria to fight alongside ISIL, Avramopoulos noted that because of its geographical proximity, Turkey is the most important country in the whole region to work with in order to address the problem and neutralize developing threats.

“That is why we insisted on reinforcing our cooperation with Turkey in this area further, proposing the exchange of liaison officers and an international agreement between Europol and Turkey to allow far-reaching information exchanges,” he added.