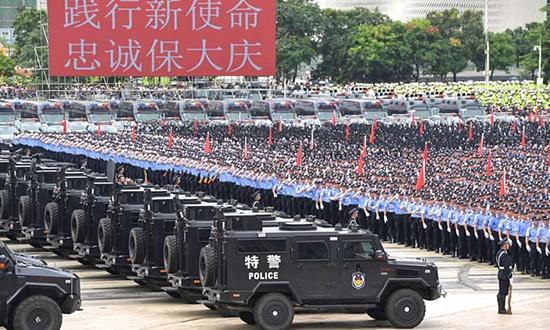 A US official has described China as a “thuggish regime” for disclosing the photographs and personal details of a US diplomat who met student leaders involved in Hong Kong’s pro-democracy movement.

The denunciation was unusually sharp and came as tensions between Washington and Beijing surged over an expanding trade war and military rivalry in the western Pacific, among other disputes.

The Hong Kong office of China’s foreign ministry on Thursday asked the US to explain reports in Communist party-controlled media that American diplomats were in contact with leaders of protests that have convulsed Hong Kong for nine weeks.

Hong Kong newspaper Ta Kung Pao published a photograph of a US diplomat, who it identified as Julie Eadeh of the consulate’s political section, talking to student leaders in the lobby of a luxury hotel.

The photograph appeared under the headline “Foreign Forces Intervene”, continuing a theme of previous protests from Beijing officials, who have blamed Hong Kong’s unrest on “black hands” from the US.

“I don’t think that leaking an American diplomat’s private information, pictures, names of their children, I don’t think that is a formal protest, that is what a thuggish regime would do,” state department spokeswoman Morgan Ortagus told a briefing late on Thursday. “That is not how a responsible nation would behave.”

Ortagus did not name the diplomat, or elaborate further on what kinds of private information or children’s details were disclosed.

CCTV, the state-run broadcaster, called the US diplomat “the behind-the-scenes black hand creating chaos in Hong Kong,” according to the New York Times, employing the term used against those who led the anti-government protests leading up to the Tiananmen massacre in 1989.

China has accused foreign powers, particularly the US, of fomenting the demonstrations in Hong Kong.

The protests, in which police have fired teargas and rubber bullets, began over a draft law that would have allowed the extradition of suspects to mainland courts. They have since grown into a broader backlash against the leaders of the former British colony and their political masters in Beijing.

Ortagus said it was the job of US diplomats and those from other countries to meet different people, including opposition leaders.

“This is not only what American diplomats do. This is what other countries* diplomats do,” she said.