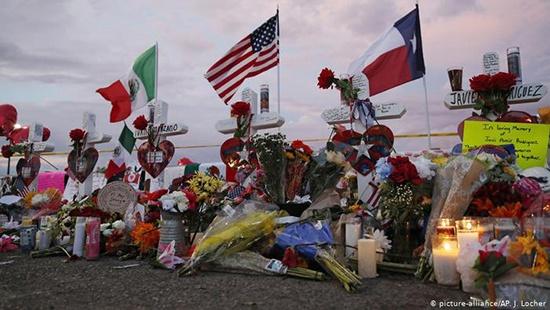 DW -The suspected shooter behind last Saturday’s mass shooting in El Paso has told police he was targeting ‘Mexicans’ in the attack. Authorities believe he wrote a racist screed decrying a ‘Hispanic invasion’ of the US.

The man accused of killing 22 people at a shopping center in El Paso, Texas last Saturday said he deliberately targeted “Mexicans” during the assault, according to police documents.

The records provided additional details regarding the arrest of the shooter, 21-year-old Patrick Crusius.

According to an affidavit, Crusius emerged with his hands up from his vehicle after it was stopped at an intersection shortly after the attack and told police, “I’m the shooter.” He then told detectives he entered the Walmart store with an AK-47 assault rifle and several magazines, and that he was targeting Mexicans.

Of the 22 people killed in the attack, eight were Mexican nationals. Nearly all of the victims were of Hispanic origin.

Crusius is believed to have posted a racist screed online shortly before the attack in which he railed against an “Hispanic invasion” of the United States. He claimed to be “defending” the United States “from cultural and ethnic replacement” and referenced the Christchurch shootings in New Zealand, where a white supremacist killed 51 people at two mosques in March.

Investigators say Crusius drove over 10 hours from his hometown near Dallas to carry out the shooting in the border city of El Paso, which is overwhelmingly Hispanic.  He has been charged with murder and is being held without bond. Federal prosecutors have said they are also considering charging Crusius with hate crimes.

The shooting in El Paso came just hours before another attack in Dayton, Ohio which left nine people dead.

The attacks have inflamed tensions over race and gun control in the US. Many Americans blame President Donald Trump for fueling hostility toward immigrants and minorities with his rhetoric. Trump has also been criticized for resisting tougher gun control measures.

On Friday, Trump said he hoped to rally Republicans around stronger federal background check laws. Republican Senate Majority Leader Mitch McConnell signaled the Senate could potentially look at a ban on assault weapons, telling a local radio station it was a “front and center” issue.