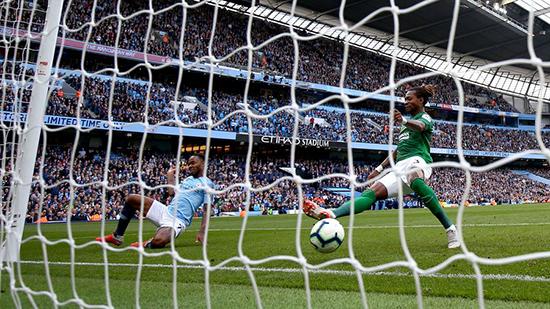 A Sterling hattrick, Sheffield heroics, more blowouts, clutch Harry Kane, and of course VAR were the defining moments of the first Premier League Saturday of 2019-20.

Liverpool’s 4-1 thrashing of Norwich wasn’t the only thrashing of the first weekend of the Premier League season as we saw tons of goals on the first full Saturday of what should be another exciting year. But before Man City kicked-off against West Ham, we got the return of the 3D logo intro. It’s so beautiful!!!

The first match of 2019-20 was typical City at the London Stadium. Manchester City starts their second-straight title defense with a 5-0 win over West Ham and the game had plenty to see. Raheem Sterling grabbed a hattrick in the victory, the first on opening weekend since 2011 as he had open space in the box and finished all his chances. We also saw VAR in action for the first time ever in the league with a Gabriel Jesus goal disallowed because Sterling’s shoulder was offsides on the initial pass and a Declan Rice encroachment allowed Aguero to retake a penalty he missed.

Despite VAR taking the attention in the second half, Manchester City once again announced themselves as the favorites with their 201st point in their last 77 EPL games. The Citizens will open at home next weekend in a much-anticipated rematch against Tottenham, the team that stopped them in Europe last season. For the losers of the match West Ham, they’ll need to recover from the defeat when they go to Brighton to play the Seagulls with a good chance of getting their first points of the season.

Everton was brought back down to Earth after their great transfer window with an opening match draw at Crystal Palace. The Toffees had more possession and shots all game against the Eagles but Palace got a shot to win when Morgan Schneiderlin got the first red card of 19-20. Wilfried Zaha came in the game but Everton parked the 10-man bus and kept the score deadlocked and the point. Everton’s home opener will be against Watford and Crystal Palace’s first road game will be at Sheffield United next weekend.

In a battle against two lower mid-table teams last season, Burnley came out on top to a great start to the campaign. The first-half was quiet but then Southampton keeper Angus Gunn faced a tough 12-minute span where the Clarets scored all three goals in the second half. Two from Ashley Barnes and one from Johann Gudmundsson has Burnley fans dreaming to start the new season.

The Saints will follow a 3-0 loss with a home opener against Liverpool, meaning we could see more goals leaked by Gunn or Alex McCarthy. Burnley travels to the Emirates to face Arsenal on matchday two.

It seems this season could be the season of routs with Brighton picking up the fourth 3+ goal victory of the weekend. A brilliant start for new manager Graham Potter as he guided his boys to the opening three points against a Watford side that was the story of last season when it all started. Florin Andone and Neal Maupay added the second and third goals in the second half after a Doucoure own goal. No doubt Brighton silenced a lot of critics that have them getting relegated this season, for the time being.

Watford will recover from their first opening match loss in 12 seasons with an away trip to Everton while Brighton tries to keep this fiery start alive with an AmEx date with West Ham.

The best of the mid-morning contests came at the Vitality Stadium with newly-promoted Sheffield United executing the first late drama moment of 19-20 with Billy Sharp’s 88th-minute equalizer. In United’s first EPL match in over a decade, they went down 1-0 after Chris Mepham scored in front of the Cherry supporters in scrappy fashion. Then late on, Sheffield pushed and couldn’t get one past new keeper Aaron Ramsdale until club hero Sharp tapped in the ball after a scramble.

Bramall Lane will welcome the side like heroes when they host Crystal Palace next Sunday while Bournemouth will be disappointed with losing a victory and travel to Aston Villa for match two.

Aston Villa held Tottenham scoreless for 73 minutes and got a lead early when John McGinn clinically silenced the Spurs fans with Villa’s first Premier League goal since 2016. Spurs kept pounding and pounding Tom Heaton with shots and they eventually were able to get the equalizer from their record-signing Tanguy Ndombele. This French 22-year old will surely have more goals like this to come in his Tottenham career.

Eventually, Harry Kane had two poachers chances that he converted and Tottenham got the 3-1 win in the opening game. They had 31 shots and got their last three goals in the last 17 minutes of the game. Aston Villa showed off their talent and new signings in the match and made a statement that they will compete. Tottenham plays City next weekend while Aston Villa goes home to play Bournemouth.

Manchester United made the perfect start to their Premier League season by inflicting a 4-0 defeat on Frank Lampard in his first match in charge of Chelsea.

Marcus Rashford scored twice as Manchester United made the perfect start to their Premier League season by inflicting a 4-0 defeat on Frank Lampard in his first match in charge of Chelsea on Sunday. Ole Gunnar Solskjaer’s men were in need of a fast start to the campaign to erase memories of a terrible end to last season and got it, as Rashford’s early penalty and three goals in 16 second-half minutes from Anthony Martial, Rashford and debutant Daniel James had Old Trafford in raptures.

Harry Maguire and Aaron Wan-Bissaka also impressed at the back on their debuts after United spent 130 million pounds (156 million dollars) on the pair over the summer to shore up a defence that conceded 54 Premier League goals last season.

However, questions will be asked of Chelsea’s decision to let experienced defender David Luiz leave to join Arsenal earlier this week as the Blues struggled to contain the United counter-attacks despite dominating long spells.

Lampard’s first team selection was a bold one as he put his faith in youth with Tammy Abraham and Mason Mount handed starts, while 60 million pounds signing Christian Pulisic was made to wait for his Premier League debut on the bench.

And Chelsea started the better as Abraham smashed a shot from the edge of the box off the post.

However, the heart of the Chelsea defence always looked fragile.

Kurt Zouma had already gotten away with gifting possession to Martial on the edge of his own box as the Frenchman shot weakly into the arms of Kepa Arrizabalaga before he was turned easily by Rashford and hauled the England striker to the ground.

Rashford dusted himself off to blast the penalty high past Kepa to open the scoring and United fed off the momentum of the goal for a spell.

Yet, Chelsea steadied themselves as the first half wore on and should have at least been level by the break.

David de Gea was forced into a fine save with his feet to deny Ross Barkley before left-back Emerson Palmieri also blasted off the inside of the post.

De Gea was at fault with a series of high-profile errors towards the end of last season, but the Spaniard —  handed the captain’s armband in the absence of Ashley Young — looked back to his old self as he beat away another two powerful drives from Emerson after the break.

And at the other end, Rashford and Martial provided the clinical touch to kill the game off in the space of 60 seconds that Chelsea lacked.

Maguire showed his presence to outmuscle Abraham on the edge of the United box and set off a flowing counter-attack that ended with Martial bundling the ball home at the far post from Andreas Pereira’s cross.

Paul Pogba then played provider with a brilliant ball over the top for Rashford to burst in behind before coolly slotting past Kepa.

Pogba was the creator again for the fourth as the Frenchman played a one-two with Rashford and powered through the Chelsea defence before laying off to James, who got the benefit of a big deflection to find the bottom corner.

Pierre-Emerick Aubameyang’s strike ruined Newcastle manager Steve Bruce’s first match in charge of the club he supported as a boy.

Pierre-Emerick Aubameyang fired Arsenal to a 1-0 win at Newcastle in their Premier League opener on Sunday, providing hope of an improved run this season for Unai Emery’s side. The Gunners finished last season in turmoil after blowing their bid for a top-four place with a disastrous spell in the final weeks. Adding to Emery’s woes, Arsenal were crushed by Chelsea in the Europa League final to shatter their dreams of Champions League qualification. But Arsenal have enjoyed a profitable close-season, with a host of new signings raising morale around the Emirates Stadium.

And Aubameyang gave Arsenal fans renewed belief they can get back in the top four this term with a typically predatory second-half finish to give the north Londoners a winning start.

Arsenal had a wretched away record last season, keeping just one clean sheet on their travels, so taking three points without conceding was the perfect way to turn over a new leaf.

Aubameyang’s strike ruined Newcastle manager Steve Bruce’s first match in charge of the club he supported as a boy.

Bruce left second-tier Sheffield Wednesday to join Newcastle in the close-season following the departure of fan favourite Rafael Benitez, who had grown tired of a lack of backing from controversial owner Mike Ashley.

Bruce’s appointment was hardly greeted with widespread joy on Tyneside and the season started with Newcastle fans staging a protest against Ashley in the streets and then boycotting the match in large enough numbers to leave numerous empty seats around St James’ Park.

Emery’s decision to leave new signings David Luiz, Dani Ceballos and Nicolas Pepe on the bench was rewarded by a determined, if only sporadically cohesive, display from his team.

There were starts for 19-year-old academy graduates Reiss Nelson and Joe Willock, but Mesut Ozil and Sead Kolasinac were absent after two men were arrested following a fresh incident after the pair were the victims of an attempted car-jacking in July.

Joelinton made his first Newcastle start after his club-record 40 million pounds switch from Hoffenheim and the Brazilian striker needed to impress to lift the gloomy mood on a rainy day in the north-east.

He had his first sights of goal when he flicked a header just wide from Matt Ritchie’s cross and then blasted straight at Arsenal keeper Bernd Leno.

Jonjo Shelvey went even closer for Newcastle as the midfielder hit the outside of a post with a stinging strike.

Henrikh Mkhitaryan squandered a golden chance to give Arsenal the lead, the unmarked midfielder firing wildly over the bar from 10 yards.

After a quiet start, Arsenal star Aubameyang, the joint top-scorer in the Premier League last season, sprang to life when he tested Martin Dubravka with a powerful strike after superbly controlling Mkhitaryan’s long pass.

It was a warning that Newcastle failed to heed as Aubameyang put Arsenal ahead in the 58th minute.

Ainsley Maitland-Niles was the provider, making a timely interception of Paul Dummett’s under-hit pass to Jetro Willems and surging away from inside his own half.

Unfurling a pin-point pass that curled over the back-tracking Newcastle defence, Maitland-Niles found Aubameyang in space and the Gabon striker took a touch before clipping his cool finish past Dubravka.

The new boys didn’t make much of an impact as Arsenal’s much-maligned defence took the plaudits.