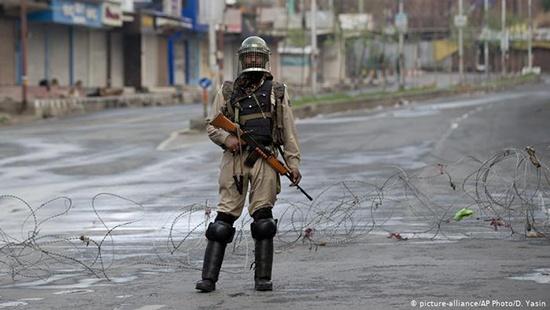 DW -All communications and internet remained cut off in India-controlled Kashmir, as the region celebrates the Islamic festival of Eid al-Adha. Authorities will not permit large congregations to avoid anti-India protests.

The internet and other forms of telecommunication remained cut off in India-controlled Kashmir on Monday, as the formerly autonomous region marked its Eid al-Adha festival.

India’s Minister for External Affairs S. Jaishankar is on a three-day visit to China, starting on Sunday, in a bid to ease tensions between the two countries after New Delhi’s drastic move to end the special constitutional status of India-administered Kashmir — known as Jammu and Kashmir.

Kashmir is claimed in its entirety by both India and Pakistan, although both countries only control parts of it. The territory has been a pending dispute since both became independent countries in 1947. Today, India has de facto control over about 45% of the region and the majority of its population, while Pakistan controls around 35%. But the remaining 20% is actually under the control of China.

“China is always opposed to India’s inclusion of the Chinese territory in the western sector of the China-India boundary into its administrative jurisdiction,” said the Chinese foreign ministry spokeswoman, Hua Chunying, following India’s move.

“Recently India has continued to undermine China’s territorial sovereignty by unilaterally changing its domestic law,” Hua added. “India’s action is unacceptable and would not have any legal effect.”

The two most populous nations in the world, India and China, have competing and unresolved territorial claims. The disputes have occasionally flared up, leading to minor border skirmishes.

The Indian foreign minister’s China visit comes after Pakistan’s Foreign Minister Shah Mahmood Qureshi’s trip to Beijing. After talks between Qureshi and his Chinese counterpart, Wang Yi, Beijing announced that it will “uphold justice for Pakistan on the international arena.”

Islamabad also said Saturday that it will take the Kashmir issue to the United Nations Security Council with Beijing’s support.

“I have shared with China that the Pakistan government has decided to take this issue to UN Security Council. We will be needing China’s help there,” Foreign Minister Qureshi told a press conference on Saturday. “China has assured full support to Pakistan.”

India, however, has maintained that its decisions to scrap the restive region’s special status and redraw its political map are “an internal affair” and aimed at ending separatism and terrorism in Kashmir. “India does not comment on the internal affairs of other countries and similarly expects other countries to do likewise,” said a spokesperson for India’s foreign ministry.

Over the past decade, New Delhi has looked warily at Beijing’s strengthening economic, military and diplomatic muscle, which has let China expand its footprint and clout even in South Asia, a region India views as its strategic backyard.

China, meanwhile, has been concerned at India’s growing closeness with countries like the US and Japan.