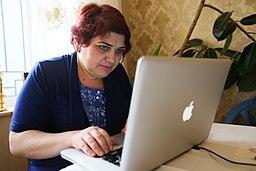 OCCRP -The Azerbaijani Supreme Court upheld on Wednesday tax evasion charges against investigative journalist Khadija Ismayilova in what critics called a vindictive act of President Ilham Aliyev, a violation of the country’s law, and a breach of its international obligations.

Reporting on Thursday about the Supreme Court’s decision, Radio Free Europe/Radio Liberty – Ismayilova’s former employer – said that her courageous reporting on corruption in her country was the reason for the bogus charges against her.

The organization’s President Jamie Fly demanded the reporter’s travel ban to be removed, the “groundless” penalties she faces dropped, and her bank accounts unfrozen.

Drew Sullivan, editor-in-chief of the Organized Crime and Corruption Project – where Ismayilova has worked as a senior investigator – said that Wednesday’s development “again shows the vindictiveness of Ilham Aliyev.”

“Clearly he personally is behind this further assault on Khadija’s human rights and freedom of expression,” Sullivan said. “But civil society will eventually take back the stolen wealth for the people of Azerbaijan and the people will someday overthrow his corrupt, tyrannical family.”

Ismayilova has written extensively about the shady business ventures of Aliyev and his associates. She has won numerous accolades for her investigative efforts, including the Right Livelihood Award and Courage in Journalism Award, and has inspired the work of dozens of other journalists committed to uncovering Azerbaijani corruption.

Aliyev’s government has accused her of multiple offenses since 2014, from criminal libel to encouraging a colleague to commit suicide. Despite blackmail and several stints in prison, she has repeatedly contested the numerous charges and received the vocal, continued support of human rights groups and other journalists.

In 2014, Ismayilova was sentenced to seven and a half years behind bars, but under international pressure authorities released her a year and a half later to serve out a three and a half year probationary sentence. She is banned from traveling and working and her bank accounts are frozen.