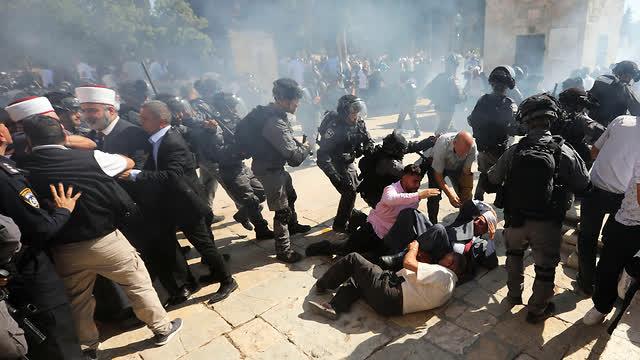 Opinion: Israel’s government has yielded sovereignty of one of Judaism’s holiest sites to a fringe group who violate a rabbinical ban on praying there, so can it really be a surprise when Muslim Waqf that oversees the compound responds in kind?

Today’s regulations restricting Jewish prayer on the Temple Mount in the Old City of Jerusalem were put in place by then-defense minister Moshe Dayan in the immediate aftermath of the 1967 Six-Day War.

As the hero of the war and the minister in charge of Israel’s security, Dayan was the de facto ruler of the territories captured in the conflict, including one of the holiest sites to Jews and Muslims.

He instructed General Motta Gur, the commander of the Paratroop Division that captured the Old City, to move his forces out of the Temple Mount compound and administration of the site was subsequently divided between the Jerusalem Islamic Waqf, which oversees the Muslim sites, and through it to the kingdoms of Jordan and Saudi Arabia, Morocco, the Palestinian street and the Isrsel Police.

Gur’s 1974 book “The Temple Mount is in our hands!” has a somewhat ironic title, given that Israel actually relinquished its control of the compound very quickly.

Dayan understood the sensitivity of the area to the Muslim world. The Jews were less of a concern for him – he knew religious Jews were not allowed to enter the historic site of the biblical temples. Everyone else, Jews and non-Jews alike, were free to visit.

And so it came to pass that the Temple Mount doubled as a Muslim shrine and a tourist attraction.

But Dayan was wrong in his calculations of the piousness of some religious Jews. What began as subversive attempts by former IDF chief rabbi Shlomo Goren and others to introduce a religious decree that Jewish prayer on the site of the destroyed temples was not a violation of religious law, started a movement that grew from a trickle of Jews to a flood. Which is where we are today.

The Chief Rabbinate has a sign at the entrance to the Temple Mount compound at the Mughrabi Bridge, warning Jews they are forbidden to enter for fear they will desecrate holy ground.

That sign is mocked daily by those members of religious communities who see themselves as adventurers – treading where few have gone before, just like those romantic Zionists who ventured across the border to Petra in the early years of the state, at great risk to their lives.

These wannabe adventurers begin mumbling prayers as they traverse the compound, proud that they have outsmarted their rabbis, the police and the Muslims too.

If a secular Israeli dared to say one word against rabbinical decrees they would be branded anti-Semitic in a flash. But these pious believers have bestowed upon themselves the freedom to disregards their own rules.

Muslims have also moved to tighten their hold on the Temple Mount. And as with every inter-religious conflict, this is about real estate.

The more Jews have tried to infringe on the unique Muslim right to pray at the site, they responded with more and more demands: The mosque is now not only Al-Aqsa but the entire compound, the Waqf has announced.

So when Jews want to enter the Temple Mount compound on Tisha B’Av, a religious day of mourning marking the destruction of the Jewish Temples that once stood at the site, Muslims consider this blasphemous and an invitation to riot.

Dayan was never much of a believer in the sanctity of rules – one of his finer qualities. But I think he too would have understood that it may be time to re-evaluate his decisions concerning the control of Temple Mount.

The sovereignty for one should be examined and redefined. The Temple Mount is where Hebrew sovereignty began. Any country that respects its history would not surrender it to the control of religious leaders.

This applies both to the Mount and its Muslim leaders and the Western Wall and its Jewish leaders. This is even more the case when these men of faith deny others’ freedom of worship.

By allowing the Western Wall to turn into an ultra-Orthodox synagogue whose officials violently banish anyone who prays differently and by surrendering national symbols to rabbis, our leaders should not be surprised by the intolerance of Muslims.

It is up to the state to protect freedom of worship. If Jews choose to disregard the decrees of their rabbis and pray at the Temple Mount – they are certainly within their rights to do so.

But they cannot settle there nor can they construct synagogues, but the humiliating scenes of Waqf officials and policemen following Jews around to discerne whether they are moving their lips in prayer is something we can all do without.

But it was It was the right and in fact the duty of the police to suspend admission should there be a danger to the public. This applies to a soccer match as well as to the holiest sites in Jerusalem.

Prime Minister Benjamin Netanyahu was right to take his initial decision to halt Jewish admission on a day that was coincidentally holy to both Jews and Muslims, and wrong to walk it back as soon as he was criticized by the religious right.

For a while, he appeared to be a wise leader who had learned from bloody past events. But it turned out that he was never the hero.