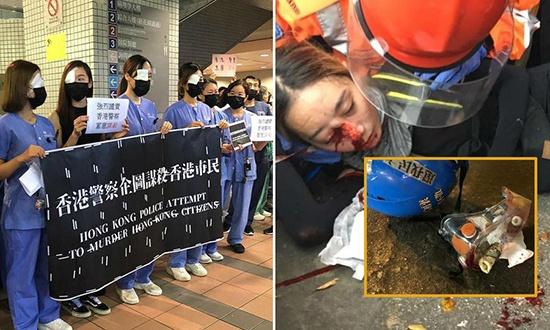 Flights resumed Tuesday at Hong Kong airport a day after a massive pro-democracy rally there forced the shutdown of the busy international transport hub.

Early Tuesday, passengers with luggage were being checked in at the departures hall and information boards showed several flights were already boarding or about to depart.

Flights out of Hong Kong Airport had been canceled on Monday afternoon after thousands of protesters staged a mass sit-in, following the shooting of a young woman in the face from close range by police the previous day.

Authorities said operations were hit hard by the protest, which prevented passengers from checking in and going through security checks. The suspension of flights was thought to be unprecedented.

The decision came after thousands of pro-democracy demonstrators flooded into the airport holding signs reading “Hong Kong is not safe” and “Shame on police”.

“Airport operations at Hong Kong International Airport have been seriously disrupted as a result of the public assembly at the airport today,” the statement said. It warned that traffic to the airport was “very congested” and the facility’s car parks were completely full.

“Members of the public are advised not to come to the airport.”

On Tuesday morning, only a handful of protesters remained in the airport. But fears of a police operation to clear the facility overnight proved unfounded, with demonstrators simply leaving by themselves.

Many of the posters and artwork they had hung throughout the facility during the hours-long rally had been taken down, but graffiti – some reading “an eye for an eye” – could still be seen in several places.

The protest was dubbed “an eye for an eye” because the young woman, who was shot in Tsim Shui Tsui on Sunday evening with a suspected bean-bag round, faces the prospect of losing her right eye.

Thousands of angry citizens wearing black started gathering at the arrival hall in Terminal 1 at the airport from 1pm to condemn the police for excessive use of force against protesters across the city.

Many donned eye patches to highlight the shooting of the woman at a bus stop on Nathan Road near Tsim Sha Tsui police station at around 7.45pm.

The sit-in by an estimated 5,000 people is the fourth protest on successive days at the airport on Lantau Island, which is one of the world’s busiest.

More than 40 people were injured in clashes on Sunday but the woman shot in the face sustained perhaps the most serious injuries. Medics said she suffered severe bleeding and had to be rushed by Fire Services paramedics to the emergency department at Queen Elizabeth Hospital – the nearest trauma outlet in southern Kowloon.

An alleged bean-bag round was seen stuck in the protective goggles worn by the victim, which were left behind along with her yellow helmet.

Details of the emergency operation the woman allegedly had to undergo were circulated widely online. It said the woman had a ruptured globe and an inferior eyelid laceration in the right eye, and emergency surgery was also needed to repair her canalicular system.

Medics allegedly told Apple Daily that the injury suffered by the woman was like trying to kill her given the severe damage inflicted on the patient.

One doctor said it was only a matter of time that the woman would lose her vision on a permanent basis, due to high intraocular pressure during the healing process. He said the victim would also be disfigured as more than a quarter of her face had been fractured, including her upper jaw and nasal bones.

A post on LIHKG, a Reddit-like forum, by a user who claimed to be the victim’s younger sibling, said her sister had not displayed any aggression towards the authorities – she had only stuck her head out from billboards at the bus stop occasionally to see what police were doing.

A man suspected to be part of the anti-riot team or a tactical unit fired shots from eight to 10 meters away, one of which hit her sister in the face and knocked her to the ground, causing severe bleeding from her nose and mouth.

Separately, a group of 200 nurses and medical practitioners from Pamela Youde Nethersole Eastern Hospital, a major acute hospital serving the east of Hong Kong Island, made a public appeal with their right eye covered by sterile gauze. They condemned the police for “attempting to murder” Hong Kong citizens, saying their “excessive use of force” was likely to blind a female protester in one eye, broadcaster RTHK reported.

An unnamed nurse said law enforcers should not abuse their power against anyone with alternative political views.

Another said it was also unacceptable that officers regularly intrude into nursing wards to try to arrest people suspected of taking part in protests while they were still receiving medical treatment.

At the time of writing, traffic was banked up on roads leading to Tung Chung and the airport on Lantau Island, with people marching toward the check-in counters.

China on Monday slammed protesters in Hong Kong who had thrown petrol bombs at police officers and linked them to “terrorism”, as Beijing ramped up its rhetoric against pro-democracy demonstrations in the financial hub.

“This wantonly tramples on Hong Kong’s rule of law and social order,” he said at a press briefing in Beijing.

Yang’s remarks came a day after thousands of pro-democracy protesters defied warnings from authorities to hit the streets for the 10th weekend in a row. Hong Kong police fired volleys of tear gas Sunday at protesters after denying their requests for permits to stage a march.

But Yang focused on the violent behavior of a “tiny minority”, which he condemned as “a serious challenge to Hong Kong’s prosperity and stability.”

Meanwhile, rumors circulated online that the protest at the airport would be dispersed at 6pm. Reporters at the 4pm police media briefing asked officers if this was true, but Senior Superintendent of the PR branch Kong Wing-cheung did not reply directly if police would disperse protesters, RTHK reported.

He said there were over 5,000 protesters at the site and the Airport Authority had their own crowd control tactics in place.

With reporting by AFP