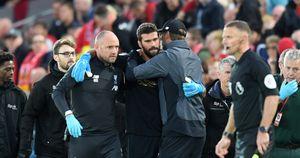 Sporting Life · Columnist
Liverpool goalkeeper Alisson Becker is set to miss “the next few weeks” with the calf injury he suffered in Friday night’s Premier League victory over Norwich.

Manager Jurgen Klopp, whose side meet Chelsea in the UEFA Super Cup on Wednesday, was unable to put an exact timescale on his recovery but has played down suggestions the Brazil international could be out of action for six weeks.

Klopp told the club’s official website: “[It’s] Not too cool. It’s a calf injury, which takes him obviously out for a while.

“I don’t want to make now [an] exact prognosis on when he will be back, but it will not be Wednesday for sure, so then we have to see.”

Becker was replaced six minutes before the break at Anfield with the Reds already leading 3-0 as summer signing Adrian was handed a competitive debut in his place. The hosts went on to win the match 4-1.

Klopp added: “It takes a while, it takes a couple weeks for sure, and we have to see.

“I saw already like ‘six weeks’ and stuff like this, but Ali was not a lot injured in his career, so I would like to wait a little bit to see how he develops in that process now, but he is not in for the next few weeks.”

Klopp expects the club to bring veteran Andy Lonergan in on a one-year deal after the 35-year-old impressed when spending time with the club in pre-season.

Lonergan’s last taste of competitive was in League One in March playing for Rochdale against Scunthorpe, but he will be on the bench as back-up to Adrian in Wednesday’s UEFA Super Cup if he signs in time.

Former West Ham keeper Adrian signed just before the transfer deadline but has now been instantly promoted to Liverpool’s number one with Simon Mignolet departing for Belgium.