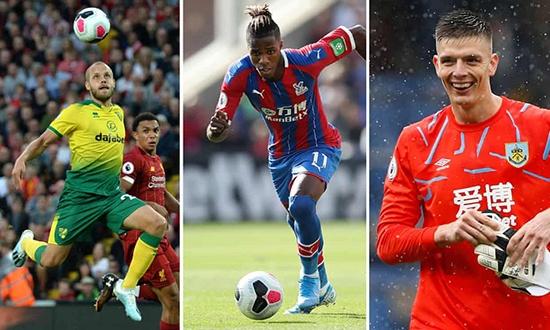 Lampard must hope Chelsea youngsters can step up, promoted trio look up for the fight and Zaha finds home comfort at Palace

Eddie Howe has a quality problem when it comes to goalkeepers. In the end it was the 21-year-old Aaron Ramsdale, who has been capped at youth level by England and shone in League One with AFC Wimbledon during the second half of last season, who got the nod ahead of Artur Boruc, Mark Travers and Asmir Begovic to make his Bournemouth debut against his former club, having left Sheffield United for around £800,000 on deadline day in January 2017. At the time Chris Wilder was six months into his dream job – and about to tie the knot with wife-to-be Francesca. “I sold him an hour before I got married in London,” Wilder said. “He tried to balls that up. Myself and the chief executive sold him and then that got done and within the hour I was married.” Ben Fisher

“I got reminded by my old man that it had been 400-and-something days since I played a league game,” said Nick Pope. To be precise, it was 454 days but the goalkeeper who had made a swift journey from obscurity to eminence appeared to have bought a return ticket during last season as he was first injured and then an understudy. But Burnley nevertheless gave him a four-year deal in May – “the manager and the club proved what they were telling me was true, they really wanted to keep me,” – and with Tom Heaton sold to Aston Villa, Sean Dyche faced the same decision that confronted Gareth Southgate before the 2018 World Cup: Joe Hart or Pope? They arrowed in on the same answer and Pope justified his manager’s faith with a flying save from Nathan Redmond at 0-0. “I think I do have to prove myself all over again,” Pope said. This was an excellent start. Richard Jolly

The reception afforded to wantaway Wilfried Zaha when he came off the bench against Everton at Selhurst Park on Saturday not only went down well with the Ivory Coast forward, who expressed his thanks after the match on Twitter with the message: “appreciate the support today 2019/20”. Having submitted a transfer request and been sent home from training after Palace blocked a potential transfer to Goodison Park, Roy Hodgson had feared the worst for the 26‑year‑old when he was introduced. “It was very nice that they are that forgiving,” he said. “I’m pretty sure he must have been thinking, ‘I wonder how they are going to react to me?’ He knows they love him but of course when you do make public statements like ‘I want to leave the club’ then you do run the risk of the fans not being happy. But luckily that wasn’t the case. Hopefully now we can draw a line under it,” said Hodgson. Ed Aarons

Faced with little time before the closure of the transfer window after the sale of Harry Maguire, and with everyone knowing they had an extra £80m in their pockets, Leicester were unable to buy a new central defender before the start of the season. That means Caglar Soyuncu, signed last year from Freiburg, will get a chance to claim a regular place. Although he is not as powerful in the air as Maguire, he made a good enough start to the season to earn acclaim from his teammates after the 0-0 draw with Wolves. “He got a round of applause from the players [in the dressing room] afterwards so he certainly impressed them,” said Brendan Rodgers. “He’s a young player and playing alongside a top‑class centre‑half in Jonny [Evans]. Jonny will help in his positioning in the game. But I thought he was excellent, really aggressive, won his headers, defended forward. And he’s good on the ball and has a good turn of speed. He did really well.” Paul Doyle

It is easy to criticise Norwich’s tactics at Anfield: against the European champions, the newcomers pursued an attacking approach that left them open, and were duly clouted. However, most weeks they will be playing sides far less good than Liverpool – for whom they still caused problems with their pacy and purposeful play. Teemu Pukki showed enough, both in front of goal and in general play, to suggest that he belongs in the top division, while Emi Buendía looks to have the touch and agility necessary to supply him. Promoted sides often pick up points at the start of the season, still grooved and confident from the previous one, and – with Newcastle, Chelsea and West Ham the next three games for Daniel Farke’s side before the first international break, Norwich now have a chance to announce themselves properly. Daniel Harris

The sight of Chelsea youth products Tammy Abraham and Mason Mount playing together for their parent club in an actual Premier League match felt novel. Transfer bans need not be too punitive when a club is one of Europe’s prime talent factories. Where predecessors fearing the Roman Abramovich axe felt unable to risk youngsters, necessity presents Frank Lampard with free rein to do so. Of the two Chelsea’s new manager trusted at Old Trafford, Abraham has the greater experience but looked far more raw, even though he rattled a post early on. Mount buzzed around impressively and outperformed Ross Barkley for one. Other, more experienced teammates were far guiltier of errors in a higher level of schooling than being loaned to Vitesse Arnhem or the Championship. John Brewin

7) Newcastle may have to rethink boycott protests

Around 300 Newcastle fans marched through the rain from the Sports Direct store in Northumberland Street and congregated by the burger van at the bottom of Strawberry Place. They made their presence felt and registered their protest against Mike Ashley’s continued ownership of the club. But still the club were able to announce an attendance of 47,635, just under 5,000 off capacity. That includes season-ticket holders who may not have turned up but, still, despite the filthy weather there did not appear to be more than 6,000‑7,000 empty seats at St James’. This is a major problem for those who wish to organise protests: it will take far more than that not to turn up before any boycott begins to have an impact and, at the moment, there seems very little appetite for that – or, at least, there are enough casual fans willing to pick up tickets to counter the recusant hardcore. Jonathan Wilson

8) Heaton looks a bargain among Villa’s many new faces

So how much does £130m buy you nowadays? Aston Villa fans began to find out after Dean Smith handed out four full debuts and two from the bench of his 12 new faces during this 3-1 defeat. There was Trezeguet, the Egyptian winger, who looked best attuned of all Villa’s forwards to the direct counterattacking Smith wanted from his team. At centre-half Bjorn Engels may not have controlled the means of production but was effective at disruption. Wesley Moraes was Villa’s least effective player and that will surely be a source of concern as – oddly given the sheer number of recruits at Villa Park – he was the only striker brought into the club. The Brazilian looked cumbersome, but also lightweight. Finally, there was Tom Heaton, amounting to just £8m of Villa’s summer spending. Not only did the keeper make two stunning saves – one on either side of his goal – but his handling, distribution and decision making were 100% Premier League proof. A bargain. Paul MacInnes

When Watford lost seven of their final 11 league games last season it seemed reasonable enough to cite their FA Cup run, and insulation from the relegation zone, as the major factors behind their slump. None of that applies to their confused, sluggish performance against Brighton though and Javi Gracia was right to offer no excuses afterwards. “We need to improve,” he said. His centre‑back, Craig Cathcart, dismissed suggestions of a hangover from last season but the biggest concern might be that their dip actually began around March. Gracia has done a fine job, and opening days have a habit of throwing up strange results, but when these sides met a year ago Watford won with ease and they will be wary of discovering that, in the Premier League, the price of sliding backwards is usually exorbitant. Saturday’s meeting with Everton, the kind of club they were more than comfortable measuring themselves against last season, could be telling. Nick Ames

10) Mahrez can provide magic in place of unfortunate Sané

Riyad Mahrez had an odd first season at Manchester City. There were times when the £60m winger looked slightly out of sync with his teammates, which can happen to players adapting to Pep Guardiola’s football, but he could not be written off as a flop. Mahrez scored some crucial goals for the eventual champions and winning the Africa Cup of Nations with Algeria last month appears to have boosted his confidence. With Guardiola not risking Bernardo Silva because of minor fitness concerns, Mahrez excelled during the 5-0 win over West Ham, laying on a lovely scooped assist for the second of Raheem Sterling’s three goals and winning a penalty for Sergio Agüero. It was the kind of performance that made the Algerian a hero at Leicester and it came as a welcome boost for City after losing Leroy Sané to a serious knee injury. Jacob Steinberg