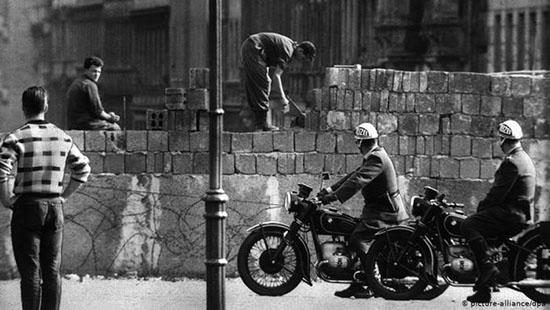 Construction of the Berlin Wall began on August 13, 1961 – the same year birth control was introduced in Germany. It was also the beginning of what would become one of the biggest names in music history: The Beatles.

“No one has the intention of building a wall,” said Walter Ulbricht, head of the State Council of East Germany, at an international press conference in East Berlin on June 15, 1961. Less than two months later, at dawn on August 13, construction workers began stretching barbed wire across the roads to Berlin’s western sectors. It was a fateful day for the German people. For 28 years, the Berlin Wall would separate the city into east and west.

Berliners were in shock. “A concentration camp barrier” has been stretched through the center of Berlin, said then mayor – and later chancellor – Willy Brandt a few hours later in front of the city’s parliament. The Berlin Wall would remain for exactly 10,315 days, becoming a symbol of the Cold War and dividing the world into two hostile blocs: the capitalist West and the communist East. More than 250 people lost their lives trying to cross the barrier.

Many of the people who fled the East in 1961 were much-needed youth: From the start of the year, every second person who made the move was under 25.

German youth in 1961 were born in the midst of war and destruction, in bombed-out cities or out in the country among billeted soldiers and refugees. Some went hungry as infants; many never got to know their fathers. Their parents would prefer to forget those dark days.

Despite the dimness of their upbringing, however, they were looking eagerly to the future. In the planned economy of the East, all workers – including women – were needed, while in the West the Wirtschaftswunder, or economic miracle, was in full swing.

In the West, the husband was customarily the only breadwinner, and he was happy to be able to provide his family not only with a home containing a brand-new fridge and a washing machine, but also the occasional camping holiday in “Bella Italia.”

Three Cs defined the role of women in 1961: children, cooking and church. Almost nobody was unemployed, and companies lured apprentices with gifts. Most Germans learned about the construction of the Berlin Wall from the radio, TV and newspapers. They also heard about Yuri Gagarin, the first man in space, as well as the Eichmann trial, in which the former SS lieutenant colonel Adolf Eichmann was put on trial in Jerusalem and sentenced to death for being one of the main organizers of the Holocaust. His statement, in which he insisted he had “only been following orders,” was a popular discussion topic.

After dinner, the family gathered in front of the black and white TV for a “Krimi” – a police mystery or detective drama – or for series like “Die Firma Hesselbach,” about the misadventures of a Frankfurt publishing family.

Schlager, petticoats and dancing the ‘Lipsi’

Many German youth quickly became bored by the daily routine: They wanted to live, and feel alive. And so they welcomed the wild, loud music that had been streaming in from the US since the mid-1950s. Not to mention a certain Elvis Presley, with his sexy gyrating hips that made girls swoon. Many adults were unsettled by these “young punks” with their tight jeans and leather jackets.

Germany’s “Elvis” was Peter Kraus, and he sang in German. Back then, even in West Germany, few people understood English. Peter Kraus posters ripped from the teen magazine Bravo decorated the walls in many bedrooms. “Backfische” – as young girls were called back then – were also crazy about movie stars like Sophia Loren, Audrey Hepburn and Peter Alexander. And then there was the singer Caterina Valente, who topped music charts with her 1961 hit, “Ein Schiff wird kommen” (“A Ship Will Come”).

In East Germany, rock ‘n’ roll was strictly forbidden. Dancing together with a partner was seen as indecent and, after all, the music originated from the United States. In the East German city of Suhl, several young people were jailed for dancing in a too “modern” fashion.

Socialist youth were instructed to dance the “Lipsi,” a couples’ dance invented as an alternative to rock ‘n’ roll: Modestly holding hands – young men in theirs suits and girls in their petticoats – the couple would try their best not to get too close to each other. In the East, as in the West, dance instructors kept a sharp eye on their students.

But these innocent times would soon be over, with clubgoers in Hamburg already getting a glimpse of the future. At the Indra club, four young men from Liverpool turned up with swinging rock ‘n’ roll cover songs. At that time, hardly anyone knew who they were, but soon teenage boys and girls the world over would be worshipping the very ground they walked on.

They were The Beatles, and they kicked off their success a year later with their first single, “Love Me Do.”

The birth control pill was introduced on June 1, 1961, though at first it was only available for married women. Fears that the pill could lead to promiscuity meant that hundreds of thousands were still forced to visit illegal back-street abortionists. For many young people, that left only one option: marriage. Young people in East Germany married especially young, often in their early 20s. Even if they had to wait for years, it was often the only way to get their own apartment.

Being young in the two German states in 1961 meant growing up in a tightly controlled society. But change was on the horizon; everything would soon be turned on its head. And the youth of 1961 would be right in the thick of it.

This article is part of DW’s feature When we were 17: Youth at the crossroads, originally published for the 100th anniversary of World War I.