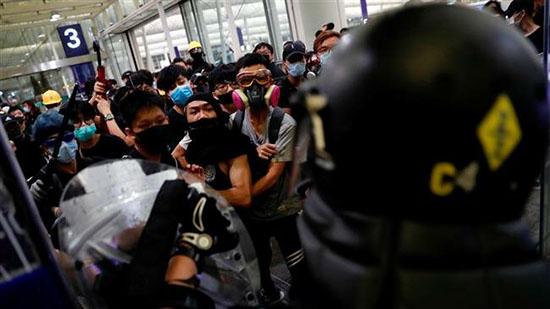 China has condemned the “near-terrorist acts” by protesters at the Hong Kong International Airport, urging the city’s authorities to hold perpetrators to account.

In a statement issued on Wednesday, China’s Hong Kong and Macao Affairs Office also strongly condemned attacks by violent protesters against a reporter from China’s Global Times newspaper and a traveler at the airport.

Unrest began in Hong Kong ten weeks ago, when people started taking to the streets to protest a proposed bill that would have allowed suspects to be extradited and stand trial in mainland China. While the government has practically dropped the bill, the protests have continued. Recently, the protests have been increasingly unruly.

Over the past two days, protesters had occupied the Hong Kong International Airport — the world’s eighth busiest by passenger traffic — disrupting hundreds of flights and affecting thousands of people.

Police forces were deployed, and small skirmishes occurred between them and the protesters at the terminals, but the protesters gradually left on Wednesday, when the airport reopened and resumed flights.

China has repeatedly warned against violence. Recently, and as the protests have become more violent, Beijing has said some protesters are acting in ways that may amount to terrorism.

On Monday, Yang Guang, an official at the Chinese Foreign Ministry, said the radical demonstrators” in Hong Kong have been using “extremely dangerous tools” to attack security forces. He said the first signs of “terrorism” were emerging.

Hong Kong has been governed under a “one-country, two-system” model since the city — a former British colony — was returned to China in 1997.

China has said foreign countries, mainly the United States and Britain, have been provoking the protesters by issuing statements of support. Beijing has asked the two countries to stop meddling in Hong Kong’s affairs.