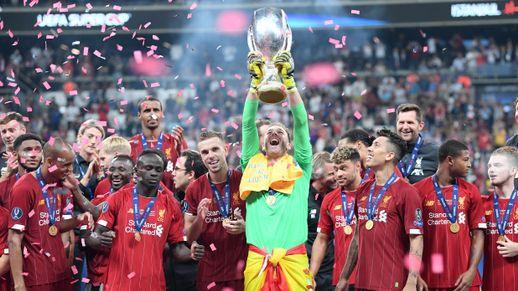 Sporting Life · Columnist
Adrian was the hero as Liverpool beat Chelsea 5-4 on penalties in the Super Cup in Istanbul.

The two sides could not be separated after 120 minutes of football, with the score level at 2-2, and the Reds eventually came out on top.

After such a taxing tie in humid conditions in Turkey, they now have to quickly switch their attentions to Saturday’s Premier League trip to Southampton.

Manager Jurgen Klopp praised the part played by Adrian, the Liverpool manager adding: “It’s so nice for him. I don’t think he won a lot in his life so to win this big one is so nice for him.”

The Liverpool manager paused his TV interview to call out the keeper’s name and referenced a scene from the hit film Rocky.

The Liverpool boss added: “It’s about winning it and we did that at the end. We showed character, Chelsea showed character as well. I think nobody in the stadium wanted twice 15 minutes (in extra time), it was a real killer.”

The USA international, who signed permanently at Stamford Bridge in January before returning on loan to Borussia Dortmund, then hit the back of the net before half-time but it was ruled out for offside by Stephanie Frappart, who made history on the night after becoming the first woman to referee a major men’s UEFA match.

Jurgen Klopp introduced Roberto Firmino at the break and the Brazilian made an immediate impact, setting up Sadio Mane to draw them level.

As the game entered extra-time, he doubled his tally, Firmino again the provider as he opened up his body and finished brilliantly into the top corner.

Frank Lampard’s side were back on level terms six minutes later as Adrian brought down Tammy Abraham in the box and Jorginho stepped up to coolly convert the resulting penalty.

After further extra-time, the game was to be decided by penalties. The first nine all found the back of the net, before Abraham was denied by Adrian.