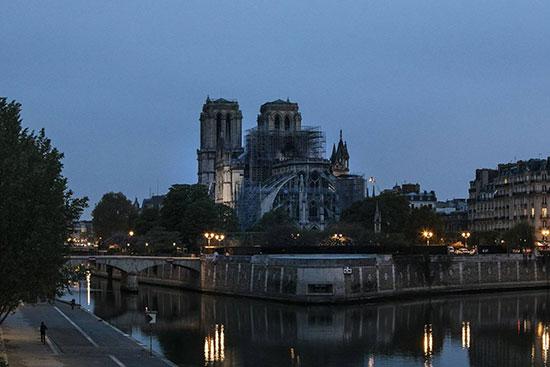 Notre Dame Cathedral in Paris is still at risk of collapse after being gutted by a fire in April, with more stonework falling during the recent heatwave in the French capital, the government said yesterday. France’s culture ministry insisted that the urgent need to make the cathedral safe had dictated the pace of the works, following criticism that it had ignored the risks of lead poisoning. Work to secure the cathedral was suspended on July 25 to allow for decontamination of the lead that had spread during the fire. The work should resume next week. A ministry official said yesterday that the stones fell after temperatures reached a record 42.6 Celsius (108.7 Fahrenheit) in Paris in late July. The official said the heat quickly dried out the mortar holding ceiling stones in place and apparently played a role.

The culture ministry said that in the aftermath of the fire all work on the cathedral had been aimed at avoiding its collapse, and had not yet involved any kind of restoration. “There were recently new falls of stones from the nave vaults due to the heatwave,” it said. “It is only the urgency linked to the persistent risk of a collapse that justifies the rhythm of work undertaken” since the fire.

French investigative news site Mediapart published a report this week accusing the ministry of repeatedly ignoring warnings by labor inspectors about the dangers posed by the lead until the works were finally suspended on July 25. But the ministry rejected Mediapart’s allegations that it had failed to pay attention to the risks encountered by workers on the site.