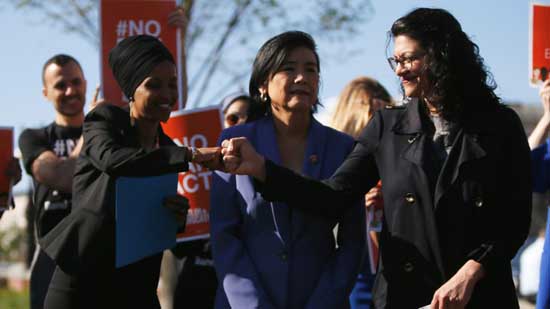 Trump’s racism and Netanyahu’s dependency have driven a bulldozer through the bipartisan consensus.

You don’t expect logic and reason to rule the day when it comes to the Middle East. But every now and then, in a limited way, you get lucky. In July, an overwhelming bipartisan majority of the House of Representatives voted to affirm the traditional tenets of U.S. policy toward Israel: opposing attacks on Israel’s legitimacy, as articulated by the Boycott, Divestment, and Sanctions movement, and supporting a two-state solution to allow Israelis and Palestinians to live in peace, security, and dignity—notwithstanding opposition to various elements of the resolution from the Trump administration, the Israeli government, and the Palestinian Authority.

This month, large delegations of members of Congress from both parties visited Israel and met with Israeli and Palestinian leaders, expressing support and asking hard questions, as allies do with one another.

Two members of Congress who have voiced strong criticism of Israel and support for BDS, Representatives Rashida Tlaib and Ilhan Omar, announced their intention to make their own visit to Israel. They would surely have given voice to their criticisms, but the Israeli government, sensibly, made clear they were welcome to do so.

Israel’s ambassador to the United States, Ron Dermer, said that “out of respect for the U.S. Congress, and the great alliance between Israel and America, we would not deny entry to any member of Congress into Israel.”

Even President Donald Trump, who has tweeted racist attacks against Tlaib and Omar and called Democrats an “anti-Israel, anti-Semitic party,” managed to divert his mania in other directions for a few weeks.

It was too good to last.

This morning, the Israeli government reversed itself with an announcement that it would not permit Tlaib and Omar to visit. Even before it was official, Trump, on cue, uncorked the gasoline, tweeting:

“It would show great weakness if Israel allowed Rep. Omar and Rep. Tlaib to visit. They hate Israel & all Jewish people, & there is nothing that can be said or done to change their minds. Minnesota and Michigan will have a hard time putting them back in office. They are a disgrace!”

Cards on the table: I strongly disagree with Tlaib’s and Omar’s critiques of Israel. Their sympathy for Palestinians is understandable. I share it and have long supported a two-state solution that ends the occupation and gives Palestinians sovereignty and Israel security.

But their views go much further. They call into question the legitimacy of Israel in any borders. They have voiced support for the BDS movement, which advocates the end of Israel, rather than the establishment of two states, and assigns all responsibility for this conflict, in all its historical complexity, to Israel alone. Omar tweeted anti-Semitic tropes, for which she later apologized.

My eyes are open about Israel’s contributions to the stalemate: the expansion of settlements, demolitions of Palestinian homes, and open calls for annexation of the West Bank. Palestinian leaders who don’t educate their people to accept Israel’s legitimacy and permanence and give tacit or explicit backing to violence also bear responsibility. And Trump walking away from long-standing U.S. support for two states has emboldened the rejectionists in both camps.

If Tlaib and Omar did not plan to use their trip to hear a broad range of views on both sides, then they were missing the opportunity to see things they have never seen, learn from people they have never met, and gain new insights into the lives of Israelis and Palestinians and pathways to resolve their endless conflict.

But the Israeli government, which has too often taken sides in America’s partisan wars of late, initially made the smart, strategic decision. It prioritized the bipartisan foundations of the U.S.-Israel relationship, the understanding that the Congress represents U.S. citizens and taxpayers who, year after year, provide major financial support to Israel’s ability to defend itself. They were willing to endure a visit in which critical voices would be heard, just as a mature, confident democracy should.

There are only two possible explanations for this about-face.

One is that the Israeli government belatedly determined that the visit would be used by Tlaib and Omar to promote their agenda, that their itinerary would focus only on the Palestinian narrative. But that is no surprise. It was obvious from the get-go that was their intent. No Israeli could have believed otherwise when the original approval was given. And in any case, over the past two weeks Israeli officials actively discouraged credible Israeli nongovernment bodies from offering briefings to the delegation that would provide a more balanced picture.

The real reason was laid bare by Trump’s tweet. Through his every word and deed, he has demonstrated that he will make deepening racial divides in the United States—around immigration, around policing, and yes, around Israel—central to his strategy for reelection in 2020.

And that puts Israeli Prime Minister Benjamin Netanyahu on the horns of a dilemma. Fighting for his own political life in elections to be held on September 17, and with indictments heading his way shortly thereafter, he has made his no-daylight-with-Trump image central to his own reelection strategy, draping tall buildings with posters of the two of them gripping and grinning. Even in Israel, where Trump is popular, it’s seen as a bit over the top.

So faced with Trump making Tlaib and Omar central foils in his political attacks, how could Netanyahu afford to allow them in? It would expose him as being not in tune with his American compatriot. Worse, it could mean Trump would deny requests to help him down the election stretch.

We once had a quaint notion—at times, observed in the breach—that the United States and Israel stayed out of each other’s politics. But there was no precedent for Trump’s all-in, out-in-the-open support for Netanyahu before the Israeli elections in April: hosting him at the White House shortly before voters went to the polls, recognizing Israeli sovereignty over the Golan Heights, and sending Secretary of State Mike Pompeo to Israel to lay on hands. And with all that help, Netanyahu could still not form a government.

Desperate times call for desperate measures. Rumors are rife in Israel over the gifts Trump may bestow on Netanyahu in the final stages of this election: a new U.S.-Israel defense pact; permitting the convicted (and now paroled) Israeli spy Jonathan Pollard to travel to Israel; a presidential visit with stops in the Golan Heights and the Western Wall; or the ultimate jackpot—U.S. acceptance of Israeli annexation of West Bank settlements.

Netanyahu will call in whatever he thinks it will take to win, no matter the blows to the two-state solution, no matter the damage to bipartisan U.S. support for Israel. He just wants to be sure that Trump will deliver.

And so, Trump’s racism and Netanyahu’s dependency have brought us to this point. Israel is showing disrespect to the U.S. Congress and looking afraid to engage Americans who disagree with it. Together, they have produced deep alienation among some of Israel’s closest friends in the Democratic Party, such as House Majority Leader Steny Hoyer, who led a large delegation to Israel just last week. They have provoked deservedly harsh criticism of Israel’s decision from progressive and minority Democratic constituencies, the rising American majority. And they have elevated Tlaib and Omar into heroes.

What a bulldozer to drive through the bipartisan consensus on Israel. What a gift to the BDS movement, which until now, most Americans had never heard of.