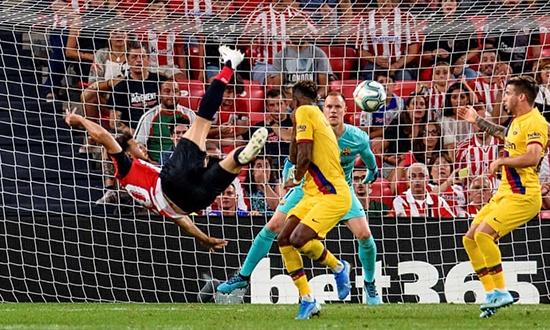 Sid Lowe at the San Mamés  – The Guardian

Aritz Aduriz is 38 and a half. He has already announced that this will be the final season of a career that stretches back to last century, aware that his time is up. It was the opening day. He was given two minutes, sent on in the 88th minute. And he was up against FC Barcelona, the defending league champions.

And? The Athletic Club striker had been on the pitch 65 seconds when he leapt into the area, turned his body sideways and, with his first touch, smashed an absurd acrobatic volley into the net to defeat Barcelona. Bilbao was barely able to believe what it had just seen.

As San Mamés went wild and Aduriz opened his arms wide, Inaki Williams, the striker he had replaced, stood and applauded; over by the other bench the Barça coach, Ernesto Valverde, just stood. His team have been beaten only four times in the last two seasons – and two of those defeats had come with the title already won. They have lost a quarter of that already.

“Bloody hell, the feeling was one of tremendous happiness,” the Athletic manager, Gaizka Garitano, said. “When the ball went up into the air and I saw the way he was positioning his body, ready for the overhead kick, well‚” Valverde admitted, the pause saying it all. He has worked here with Aduriz before; he knew. “Every time the ball is in the air in the box, he’s a danger, and he scored a brilliant goal,” Valverde added, “I wasn’t surprised at all.”

Everyone else was. This was not supposed to happen. Barcelona, though, could have no complaints. With Lionel Messi out injured, Luis Suárez withdrawing with a calf strain in the first half, Antoine Griezmann largely irrelevant and Ousmane Dembélé worse, losing almost every ball he got and never carrying a threat, this was a dreadful display. It was also one that may fuel the idea that perhaps they could do with Neymar after all. There was so little spark, no daring, no change of pace, no creativity.

Yet it went deeper than that, beyond the front three. This was a defeat that will increase the pressure on a coach who had appeared on the way out at the end of last season and is already only a handful of bad results away from the end. Against a tough, intense Athletic side Barcelona were poor everywhere. “Physically they were better than us,” Gerard Piqué admitted, and the Catalans looked like a team (if they looked like a team at all) that have had a pre-season which took them around the world.

It went deeper than that, though. This was not just physique, it was football. “We did not get control of the game in the first half,” Valverde admitted, even if they did twice hit the post, first from Suárez – his last act – and then from Rafinha. The second was not much better: if they had more of the ball, if the manager rather optimistically said they had been camped in the Athletic half, Ivan Rakitic coming on to gain some control, they created little. The Croatian’s shot over was the only real opportunity. Nor was there a sense of urgency, the feeling that they would throw everything at this in search of a winner.

Time ticked away from them and then, with two minutes left, Aduriz replaced Williams and ran on to a huge roar that was quickly replaced by something even louder.