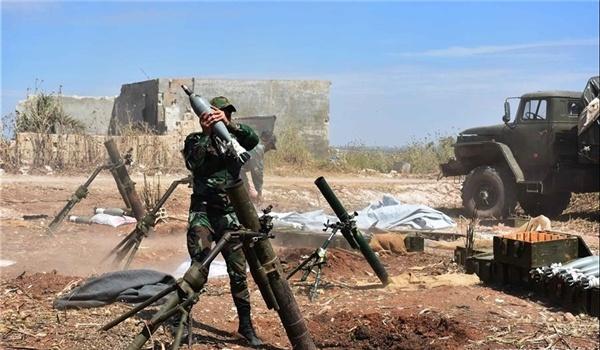 TEHRAN (FNA)- The Syrian army advanced in strategic areas in Northeastern Lattakia concurrent with its battle in Southern Idlib and Northern Hama, arriving at the entrance of Turkistani party terrorists’ bastion town of Kabana.

The Arabic-language service of Sputnik news agency quoted a field source as saying on Thursday that the army forces, supported by the Russian fighter jets, could regain control of the heights overlooking Kabana which is the Turkistani party’s main stronghold at the border with Idlib.

He added that the Syrian army forces could recapture Jabal al-Zawiqat and the adjacent hills as the most important corridor leading to the strategic town of Kabana, noting that the terrorists’ defense lines have collapsed given the Syrian army’s concurrent advance in Northern Hama and Southern Idlib.

Kabana’s freedom will pave the ground for the Syrian army to enter the Turkistani terrorists’ most important bases and towns in Jisr al-Shaqour, Badama and al-Sarmaniyeh in Western and Southwestern Idlib.

In a relevant development last Saturday, the Syrian army pushed terrorists back from several regions after opening new fronts in Northeastern Lattakia as it kicked off new military operations in Northern Hama and Southern Idlib.

A Syrian Army source said government troops have opened a new route towards Kabana strategic hilltops in Northeastern Lattakia as they continued clashes with terrorists in Northern and Northwestern Hama as well as Southern and Eastern Idlib.

The source noted that the Syrian Army troops, backed up by artillery and missile units and also the country’s air force, engaged in fierce clashes with Tahrir al-Sham al-Hay’at (the Levant Liberation Board or the Al-Nusra Front) in Tal al-Zaviqat near Kabani Hilltops, inflicting heavy losses on the terrorists.

The English-language al-Masdar news website, meantime, reported that the Syrian Army troops managed to impose full control over three out of five military spots, including Hilltop 121 near Kabana in Northeastern Lattakia.