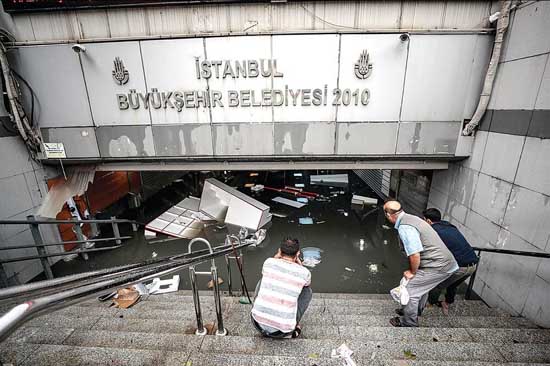 Istanbul Mayor Ekrem İmamoğlu said on Aug. 18 that the municipality will scrutinize the city’s infrastructure after flash floods killed one person the previous day.

“This [the flooding] was an inter-warning…I have talked with our general secretary [of the municipality]. I have said, ‘Undertake a work immediately regarding the infrastructure by summoning all the relevant units [of the municipality],” İmamoğlu told reporters at the Istanbul municipality’s Disaster Coordination Center (AKOM).

“Our instruction will be as follows: A work will be undertaken to determine the areas that were at risk at such disasters in Istanbul’s history during the last 20-25 years. By considering all of these [areas], middle-term and long-term precautions will be listed. We’ll inform the press regarding this issue,” İmamoğlu said.

Heavy rains in Istanbul on Aug. 18 flooded several neighborhoods, while officials said one person was found dead in the city.

Rain started early in the day in parts of the city and picked up pace around noon.

The pedestrian underpass in Eminönü Square was filled with floodwaters as the shops inside suffered great damage. Video footage shows shopkeepers trying to save their merchandise from the nearly waist-deep floodwaters.

Floods also affected the historic Grand Bazaar – one of the world’s oldest covered markets – with shop owners rushing to evacuate the water.

A homeless man was found dead under the Unkapanı Bridge during draining operations.

Many cars were stranded in traffic and rescued by fire engine teams. In one district, a parked car fell into a pit the heavy rain had caused on the roadway.

As in previous heavy rainfalls, the sea flooded Üsküdar Square creating a view as if the sea met the land.

AKOM said 114 kilograms of rain per square meter had fallen in the Fatih district, where the Grand Bazaar, as well as the Unkapanı and Eminönü areas, are located.

One of the places that İmamoğlu visited in the aftermath of the havoc was the Eminönü Underpass. Here İmamoğlu said that the rainfall warning from the State Meteorological Service had reached them at 12.30 p.m. on Aug. 17, but the rains had already started in the city by this time.

“In Istanbul, there should be a fast flow of information [between authorities]. The rain warning came to us from the Meteorological Service at 12.30. At his hour, the rain had already started. And 15-20 minutes later, a rainfall that reached a downpour of 114 kilograms per hour started,” he said.

“The warning from the Meteorological Service was very late. It was reported as ‘medium severity’ with about 40 kilograms of rain, but there is a big difference,” he said.