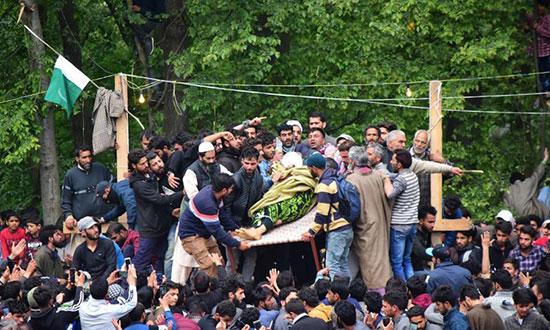 There have been daily protests since August 5, when the Indian government revoked the region’s special status.

SRINAGAR, India—A loud voice brings a speaker installed on a mosque’s minaret to life, calling for the young to come out of their houses and stop the police from entering the neighborhood. Within minutes, a crowd gathers in the narrow streets of Soura, which lies on the banks of Anchar Lake here in the capital of Jammu and Kashmir.

This has been the scene every night since August 5, when the Indian government revoked Kashmir’s special status, downgraded its position as a state, and gave New Delhi a more direct role in its governance.

Amid the anxiety, the Kashmir valley is under an official lockdown: The Indian government, led by Prime Minister Narendra Modi, has suspended all communication channels, including the postal service. The streets are manned by paramilitary forces. Violence has been mostly restricted to dozens of stone-throwing incidents, though many protesters have been injured by pellets fired by security personnel. Kashmiris are anxious and enraged by the situation—and the communication blackout that has left them cut off from the rest of the world for the past 14 days.

In Soura, after the entreaties made on the mosque’s speakers, young men emerged from their multistory mud-brick houses to prepare their own cordon. They set up barricades at all entry and exit points. Overnight, they gathered logs, tin sheets, stones, and bricks; a few roads were dug up to stop police vehicles from entering. Residents took turns to keep vigil at night. On Monday, when Eid was marked, and then on Friday, residents marched around the local shrine and dispersed peacefully. A few days earlier, a similar protest march was met with tear-gas shelling and pellets.

The Hindu, a respected Indian newspaper, reported 140 incidents of stone throwing in the first eight days following the abrogation of Article 370, the provision of the Indian constitution that granted Kashmir special status. But reports of protests from other parts of the region are difficult to ascertain because of the government-imposed communication blackout.

“News from here doesn’t go out,” Shabir Ahmad, 28, who runs a business selling handicrafts, said. “They [the Indian media] are showing whatever they want to. People outside don’t get to know about the situation here … Parents don’t know whether their children are safe or not.”

Many Kashmiri Muslims fear that New Delhi wants to change the demography of the region by moving in more Hindus. (The state’s once robust Hindu minority was driven away in the 1990s by militants.) They believe that this decision, rather than drawing Kashmir more deeply into India, will alienate it further.

“They will soon start settling non-Muslims in Kashmir,” said Muzamil Bashir, a 23-year-old college student, in downtown Srinagar. “We won’t have any choice—and we can’t oppose it either. We are slaves now.”

The outrage is simmering among Kashmiris, but hasn’t yet, barring few exceptions, found an outlet. Gowhar Nazir, 28, a lecturer at the University of Kashmir, said it stems from a sense of betrayal.

“We’ve been betrayed by the Indian government,” he said, adding, “It is a blot on democratic India, and the blackest day for India and Kashmir.”

Indeed, a few days before India’s decision, the government ordered all tourists and pilgrims in Kashmir to leave the state, citing an imminent security threat. Kashmir’s political leaders were taken from their homes to a temporary detention center, where they remain incommunicado.

With chaos and rumors filling Kashmir’s summer air, the communication blackout compounded the frustration and anger. Ahmad, the businessman, said everything was shut; there is no contact with family or friends, and no way to get help.

The crisis has hit Kashmir’s already fragile economy. Tourism, the lifeblood of the region, is at a standstill.

“They forced tourists to leave, so how can our business function?” Ahmad asked, looking at the shut doors of his handicraft showroom near Dal Lake. “They should have asked Kashmiris what they want. They kept Kashmiris silent at gunpoint and forced this upon us.”

Abid Ahmad Kuchey, 26, who had worked at Aegis, a call center, for three years, was fired. “They told 180 employees, all Kashmiris, to quit, and the reason given was that the company can’t function in the current circumstances.”

“The communication blockade has pushed us to the Stone Age,” Areeb Ashraf, 26, a civil engineer, said. One of his uncles was hospitalized, he said, but his family doesn’t know which facility he’s in. Another uncle, he was told at the hospital by a relative, had died four days ago.

“Whatever is happening in Kashmir right now is heart-wrenching,” he said. “This shouldn’t happen anywhere … This is not the way of integration. If you want to be my friend, you have to offer friendship. It doesn’t happen through military attacks and communication blockades.”

A government spokesman told reporters yesterday that the curfew is being eased in a phased manner, and that communication will be restored eventually. Primary schools and government offices will reopen tomorrow, he said.

The roots of New Delhi’s decision this month lies in the period called partition, when British India was cleaved into Muslim Pakistan and Hindu-majority, but officially secular, India. Kashmir, which at the time was a Muslim-majority princely state ruled by a Hindu king, ultimately opted to join India with conditions. In return, it was offered special status that, among other things, barred Indians from the rest of the country from buying land or property in what became the Jammu and Kashmir state. Over successive decades, government corruption, political malaise, and support from neighboring Pakistan, which also claims Kashmir, metastasized into a full-blown independence movement and insurgency in the late 1980s. India’s government, which is run by the Bharatiya Janata Party, believes that the main reason for this rebellion is Article 370. The government maintains that the provision’s removal will allow investment to pour into Kashmir and integrate it more fully with the rest of India. This position has broad support in the rest of India—even if the government has been criticized for the manner in which it is dealing with the region.

Paramilitary forces have set up concertina-wire barricades to limit movement. Kashmiris can be seen with ID cards, prescriptions, curfew passes, and expressions of helplessness. Among those detained was Irfan Amin Malik, a reporter with the local daily Greater Kashmir, who was picked up from his home on Wednesday night. No reason was given, though he was freed later that night, after paying a bond. Several journalists said they were beaten or disallowed from moving around during restrictions.

Still, journalists gathered in the Soura neighborhood Friday to cover a protest march. Some Kashmiri youths asked all the people with cameras where they were from, ensuring that they weren’t from Indian broadcast media, which is widely viewed as biased.

“I won’t tell you my name … You don’t need my name,” said one woman who took part in the protest. “There is oppression going on right now in Kashmir … Modi says he will give buildings, factories, jobs, but what do we do with that? … We want our children to live in a peaceful and free Kashmir.”

New cold war will not stop US decline