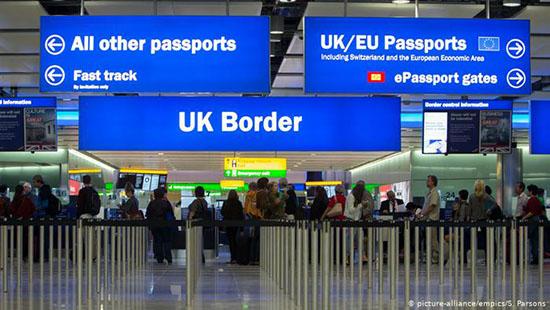 The British government said if it were to leave the EU without a deal on October 31, freedom of movement rules with the EU would immediately end. Critics have blasted the move as “reckless.”

The British government on Monday said it will end European Union freedom of movement rules “immediately” in the event of a no-deal Brexit on October 31.

The move is a departure from UK Prime Minister Boris Johnson’s predecessor, Theresa May, who had said the government would end free movement “as soon as possible” if the UK left the EU without a withdrawal deal, suggesting the rules could be phased out.

The Home Office in a statement on Monday said, “We are leaving the EU on 31 October come what may. This will mean that freedom of movement as it currently stands will end on 31 October when the UK leaves the EU.”

“EU citizens will still be able to come to the UK on holiday and for short trips, but what will change is the arrangements for people coming to the UK for longer periods of time and for work and study.”

“Details of other changes immediately after 31 October and improvements to the previous government’s plans for a new immigration system are being developed.”

The Home Office said there would be no changes to the December 2020 deadline to apply for Britain’s EU Settlement Scheme, which covers all EU citizens and their families living in the UK by the end of October.

The announcement troubled MPs across party lines, including some within Johnson’s Conservative Party. MP Alberto Costa, who has been urging the prime minister to avoid pursuing a no-deal, tweeted that the latest development was “a wholly unworkable policy and deeply worrying.”

Pro-Remain camps also came out to blast the decision, including the Liberal Democrats party, which have campaigned for a second referendum.  In a tweet, the party said “this will hugely increase the damage caused by a no-deal Brexit. It is irresponsible and reckless.”

Twenty-four British members of European Parliament — the majority of whom were with the Green, Labour and Liberal Democrats parties — co-signed a letter condemning Home Secretary Priti Patel’s “ill-chosen remarks.”

“For the sake of the millions of EU citizens and their families that we represent, we ask that you immediately reconsider this cruel and anti-democratic policy,” the letter said.