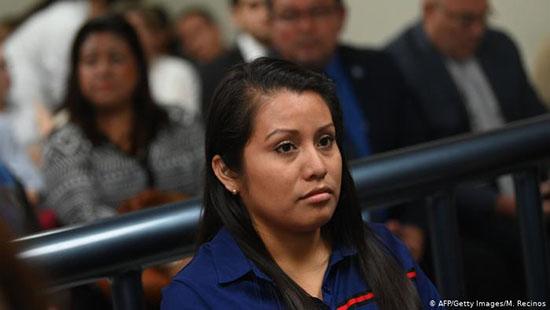 A 21-year-old Salvadoran woman accused of killing her stillborn child has been cleared of her aggravated homicide conviction in a retrial. The case was closely watched by rights groups.

A Salvadoran appeals court has cleared a woman previously convicted of killing her stillborn child, overturning a 30-year prison sentence, her lawyer said on Monday.

The defendant, Evelyn Hernandez, 21, has already served three years of the sentence handed down after prosecutors said she had aborted the child of her rapist.

El Salvador has draconian anti-abortion laws, which include stillbirths during a home delivery or terminations due to medical emergencies even though these emergencies cannot actually be defined as abortions. Nevertheless, they sometimes lead to 40-year prison sentences for women. The ban is complete and also covers pregnancies due to rape.

The retrial took place after Hernandez’ legal team appealed the 2017 verdict , saying that the ruling had ignored key forensic evidence indicating that the baby had choked in the womb.

Hernandez gave birth to a stillborn son in the bathroom of her home in 2016 at the age of 18. Her pregnancy, of which she says she was unaware until the birth occurred, was the result of a rape that she did not report because of threats to her family.

Some 147 Salvadoran women have received decadeslong prison sentences in such cases between 2000 and 2014, according to a local rights group, the Citizen Group for the Decriminalization of Abortion.

“There are many women who are still locked up, and I call for them to be freed soon, too,” Hernandez said.