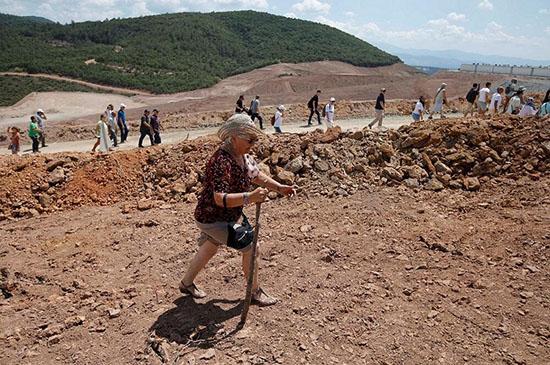 Syrians refugees in Turkey, increasingly seen as as a burden on a flailing economy and a symbol of President Recep Tayyip Erdogan’s failed policies, are facing an unprecedented crackdown in which they are being deported to their war-torn homeland.

Not only men, but mothers with children, tell Asia Times they have been caught up in dragnet sweeps on the streets of Istanbul and bussed back to northern Syria amid ongoing hostilities between the Syrian regime and Islamist rebel factions on the ground.

One Syrian mother, Umm Omar, said she was on the way to a doctor’s appointment for her four-year-old when she was apprehended by Turkish police in a metro station on July 19.

“I had to take my little boy to the Fatih district to see a doctor. I knew there was a crackdown going on, but I assumed the Turkish police would leave me alone since I’m a woman,” she told Asia Times.

In the metro, however, the police were stopping everyone. She watched as a woman in front of her, who had a Temporary Protection identity card – but for residence in a different province of Turkey – was stopped.

“The police let her pass, but in a very nasty way. The officer told her she should not use the metro anymore, and that it was for Turks,” she said.

The mother, however, did not possess an Temporary Protection card, as Istanbul authorities had stopped issuing them by the time she fled her hometown in the Damascus suburbs in 2018.

The police brought her and her son to a local police station, where she says she was “intimidated” into signing a voluntary return form. They would be sent to the northwestern province of Idlib, where Al-Qaeda holds sway and Russia is backing the Syrian military in an ongoing offensive.

The bus did not make any stops for bathroom breaks, she said, and the group was offered a meal only once during the entire 16-hour trip.

“The children cried the whole way,” she said, in a message sent via Whatsapp from Idlib, where she has taken temporary shelter with a family she knows.

Despite his age and weary face, Abu Mohammed, 50, was not spared the attention of the Turkish police when he was on his way to work at a sewing factory in Istanbul in mid-July.

Two years after claiming asylum in Istanbul with his wife, among the tens of thousands fleeing hostilities in Aleppo province, he was detained by the police in Esenyurt Square on July 17.

When he was first brought to the local police station, along with other Syrians, the idea did not cross his mind that he could be deported to a war zone. Then, he says, they were asked to sign a voluntary return document.

“The officers told us to sign a paper written in Arabic stating our return was voluntary,” he told Asia Times via Whatsapp. “We refused at first, but then they started severely beating the younger guys.”

At around 7 pm, the group was transferred to another prison for foreigners on the Asian side of the city.

“The buses were already waiting there to take us to Idlib province,” Abu Mohammed said, adding that he was given no opportunity to contact his wife, now alone in the metropolis of Istanbul, or to collect his Syrian identification papers.

The journey took 17 hours, during which the group traversed the length of Turkey all the way to the eastern border with Syria. He said they were given only a meager amount of food and water.

“The whole time my fear was growing, especially when we approached the Syrian border, which is controlled by the opposition factions,” he said.

He feared the Islamist factions controlling the Syrian side of the border would put him under scrutiny. But the operation appeared to have been cleared. He, without his ID – along with nearly 60 other Syrians transported on buses – was allowed to pass through without issue.

“They left me to an unknown fate. I don’t know what to do now … I don’t have any money or home here,” he said.

The 50-year-0ld man now sleeps in a mosque for shelter.

In the years following the outbreak of the Syrian civil war in 2011, Turkey has granted Temporary Protection status to 3.6 million Syrians – more than all of the refugees in Europe combined.

Tension between Syrians and their Turkish hosts has risen in recent years in parallel with a faltering Turkish economy, public frustration with the Erdogan government, and a sometimes deadly Turkish military intervention across the border.

Syrian refugees tell Asia Times they believe their Turkish neighbors in recent weeks have told the authorities where they are staying in large groups, prompting heavy-handed raids.

Saeed, 20, was waking up before dawn to go to work on July 18, when he heard a violent knock at the apartment door in his district of Zeytinburnu.

“The knock was so loud and we were so afraid. At first we decided not to open the door, but when we heard a voice that began to threaten to remove the door, we opened it immediately,” he told Asia Times.

A group of police officers stormed the house, angrily demanding the Temporary Protection cards of the seven young men. All were arrested.

“Some of them didn’t have the Kimlik card [Turkish identification card], others were registered in another province, and one of us was registered in Istanbul but he hadn’t updated his address, so they took him too,” Saeed recounted.

Said and his friends were taken to the police station in the Zeytinburnu district, where they stayed overnight. “We were beaten and insulted by the police, and then handcuffed with plastic,” he said.

The group of about 32 men was taken to the Sabiha Gökçen airport, where buses were waiting for them in a line. Saeed said all of their personal effects, from cell phones to belts and shoelaces were confiscated.

“There were six Turkish police officers who beat us and insulted us throughout the journey to Idlib. I don’t know what we did to be treated this way,” he said.

In a July 26 report, Human Rights Watch accused the Turkish authorities of coercing Syrians into signing voluntary return forms and “dumping them in a war zone.”

Syrian opposition authorities at the Bab al-Hawa border crossing with Turkey reported the entry of more than 6,000 Syrian refugees in the month of July alone.

The Turkish government has insisted that it is not deporting Syrians against their will.

Despite such assurances, Syrians in Istanbul, even elderly people in need of medical treatment, now say they are staying inside their homes for fear of arrest. For breadwinners, it is better to lose a job in the short term than be deported to Idlib.