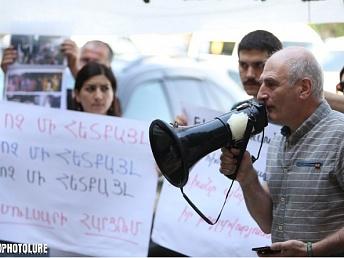 YEREVAN, August 21. /ARKA/. In a late August 19 night Facebook-live session, Armenian Prime Minister Nikol Pashinyan explained why his government would like to allow Canadian miner Lydian International to proceed with its contested Amulsar project in Armenia.

Throughout his almost 80 minute-long live-session Pashinyan would repeatedly recall his past statements regarding the Amulsar project.

The development of the Amulsar project was halted in 2018 June after environmental groups and local residents set up illegal blockades preventing access to the mine. They argue that the project would pollute the Jermuk mineral water springs and Armenia’s largest Lake Sevan. Police have failed to remove the protestors.

According to Pashinyan’s Facebook live session, any decision on Amulsar must be made on the basis of facts, not emotions, by observing the country’s balance of interests, which consists of several components, such as environmental, economic and legal.

He said Amulsar gold deposit will be developed in accordance with highest environmental standards unprecedented for Armenia. Other mining companies will have to gradually comply with those standards.
He said further that his government is aware of the difficulty of taking such steps, and therefore does not require that they are implemented immediately. He said also the government is not pressured on the issue of the Amulsar field and will suppress such attempts.

In July 2018, bowing to the pressure of Lydian Armenia and environmental activists Armenia’s Investigative Committee launched an inquiry to examine claims of willful concealment of environmental pollution data regarding the mine. The Lebanese consulting firm ELARD was contracted as part of this investigation to review the results of the previous two environmental assessment studies on the mining site.

On August 15 the Toronto-based Lydian International Limited announced that the Special Investigative Committee of Armenia (ICA) released the ELARD report on the environmental audit .

In a statement, Lydian quoted Hayk Grigoryan, the head of ICA, as saying that the investigative body had analyzed the information and findings provided by the international audit report and found there were no grounds for criminal prosecution and continuation of criminal proceedings against the company.

The audit focused on the “wilful concealing of information about pollution of the environment by officials related to the exploitation of the Amulsar gold mine” and was started in March this year.

Lydian Armenia was founded in 2005, and all 100% shares in it are owned by Lydian International. The Amulsar mine program is the first project of the company in Armenia. The Amulsar gold deposit is the second largest deposit in Armenia in terms of gold reserves and is said to contain about 31 million tons of ore and 40 tons of pure gold.

Armenian local environmentalists and residents of nearby villagers have been protesting against the development of the mine for years, claiming that the mining activities would endanger the region’s water resources and the local population’s health. . –0-