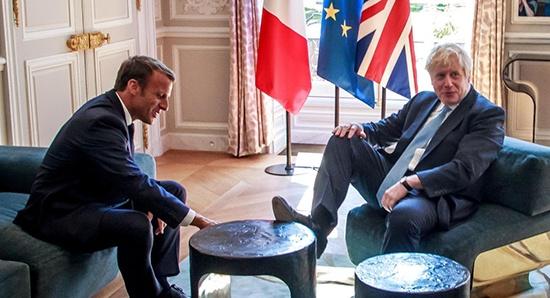 Britain’s newest prime minister was meeting with the French president one day after talks with Angela Merkel, as he was exploring the possibility of a new Brexit deal. Both France and Germany have demanded that the UK draft a new Brexit plan within 30 days, as just over two months remain before Britain is slated to depart the union.

The two politicians met at the Elysee Palace on Thursday, ahead of the weekend’s Group of Seven summit in Biarritz.

A visibly relaxed Johnson was photographed sitting in front of Macron, with his legs spread and one foot resting on a coffee table.

The reactions to Johnson’s perceived “disrespect” were quick and furious.

Alastair Campbell, a former communications director for Tony Blair, told PA news agency: “It’s embarrassing that the newly-elected Prime Minister of the United Kingdom takes so long to go and see the German Chancellor and French President and then sticks his feet up on the President’s table.

“It might sound trivial but it just shows complete arrogance and disrespect.”

But it turned out that the prime minister had jumped a conclusion.

Sky News reporter Tom Rayner has shared a video of the conversation between Macron and Johnson ahead of the snap.

President Macron appeared to have made a jokey suggestion that the tiny coffee table, coupled with Johnson’s chair, could make a good recliner, with the Tory leader putting his foot up for a second in response – and this is when the ambiguous photo was taken.

President Macron’s office later described the talks as being “constructive” and “thorough”.

Johnson this week paid his first official visits outside the UK as the country’s’s prime minister, travelling to Berlin and Paris.

Britain has yet to renegotiate a final withdrawal agreement with the EU before the 31 October Brexit deadline. If Johnson fails to do so, he vows to pull the country out of the club it joined in 1973 anyway.

The stumbling block in negotiations with the European Union is the so-called Irish backstop, a safety net provision intended to ensure there will not be a physical border between Northern Ireland, part of the UK, and the Republic of Ireland, an EU member state.

It stipulates that if London and Brussels don’t agree on a final deal that would guarantee a soft border, Northern Ireland would stick to the customs union and some aspects of the single market.

To avoid splitting Northern Ireland off from the rest of the country, Britain would also have to stay in the customs union, with London decision-makers fearing this would effectively handcuff them to the EU and hamper their ability to strike independent trade deals with third countries.

The backstop provision agreed to by Theresa May and Brussels negotiators in 2018, was the main reason why her divorce deal was crushed in parliament three times, forcing her to delay Brexit twice.

Boris Johnson is seeking to renegotiate this part of the agreement, which could help him avoid the much-feared no-deal Brexit scenario, but Emmanuel Macron told him that the Irish backstop is “indispensable” to a prospective Brexit deal and urged him to set out alternative solutions on the issue within 30 days – in line with what Angela Merkel asked.