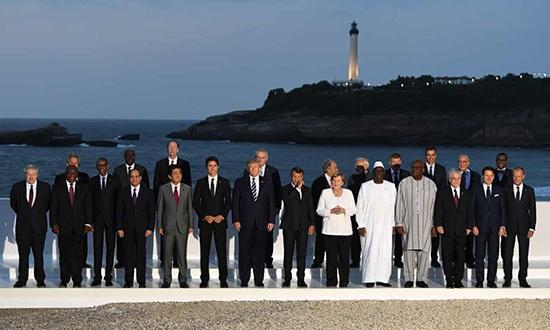 US president argues Putin should be included in discussions on Iran, Syria and North Korea

Donald Trump has rowed with his fellow G7 leaders over his demand that Russia be readmitted to the group, rejecting arguments that it should remain an association of liberal democracies, according to diplomats at the summit in Biarritz.

The disagreement led to heated exchanges at a dinner on Saturday night inside the seaside resort’s 19th-century lighthouse. According to diplomatic sources, Trump argued strenuously that Vladimir Putin should be invited back, five years after Russia was ejected from the then G8) for its annexation of Crimea.

Of the other leaders around the table, only Giuseppe Conte, the outgoing Italian prime minister, offered Trump any support, according to this account. Shinzo Abe of Japan was neutral. The rest – the UK’s Boris Johnson, Germany’s Angela Merkel, Canada’s Justin Trudeau, the EU council president, Donald Tusk, and the French president, Emmanuel Macron – pushed back firmly against the suggestion.

“On that point … it became a bit tense to say the least,” a European diplomat said. “Most of the other leaders insisted on this being a family, a club, a community of liberal democracies and for that reason they said you cannot allow President Putin – who does not represent that – back in.”

“That is not such a very important thing for [Trump]. He doesn’t share that view,” the diplomat added. According to this account Trump argued that on issues such as Iran, Syria and North Korea, it made sense to have Russia in the room. “So he had a really kind of fundamental difference about this.”

The summit is being hosted on Biarritz’s Atlantic seafront, which has been entirely sealed off for the event. Encouraged by warm breezes and mostly sunny skies, several of the leaders chose to walk from their grand hotel to the venue for the talks along the deserted and heavily guarded beach in front of the city’s casino.

In breaks in the negotiations, they have been treated to the best of the Basque region’s cuisine, prepared by top local chefs and kitchen staff from the Élysée Palace.

Below the pleasantly gilded surface, however, there has been an undercurrent of bitterness and anxiety at the summit. Boxed in by multiple global crises, the group of major industrialised democracies is arguably at its most divided since its founding in 1977.

Trump has been arguing for Russian readmission since the G7 summit in Quebec last year and appeared determined to revive the demand, bringing it up in a discussion about Iran policy and taking his counterparts by surprise with the vehemence of his views on the subject.

There was nervousness about Trump’s arrival, in the midst of a trade war with China and his reported reluctance to attend, arguing it was not a good use of his time. At the previous summit in Quebec, Trump left early and ordered US officials to withdraw his agreement to a joint communiqué. As a precaution this year, Macron decreed there would be no communiqué to withdraw from.

In an attempt to win over Trump, Macron staged a benign ambush as the US president arrived, whisking him off to an unscheduled lunch, where the two men talked without officials or aides for nearly two hours.

Trump later tweeted that it was “the best meeting we have yet had”, though he misspelt the French president’s name and accidentally linked to a parody Macron account, which has since been suspended.

Macron’s tactics infuriated some US officials, who called several members of the travelling White House press on Saturday afternoon to leak against the French host, claiming he had filled the summit agenda with “niche” subjects such as climate change and equality with his own domestic audience in mind, rather than sticking to global economics and trade, which have traditionally been the focus of G7 meetings.

Speaking anonymously, the officials also claimed it was only on US insistence that there would be a summit session on economics and trade at all, a claim denied by the French, and undermined by the existence of earlier drafts of the agenda, which all had such a session included.

When the time came for the leaders to gather outside the 1830s lighthouse, dating from the reign of King Louis Philippe, a scheduled group photo was unexpectedly cancelled. The reason for the cancellation was not explained, though officials pointed out there was a bigger family photo, including invited guest leaders from India, Australia, Spain, South Africa and several other African states.

Not included was a surprise guest who flew in on Sunday afternoon: the Iranian foreign minister, Mohammad Javad Zarif, at the invitation of his French counterpart, Jean-Yves Le Drian. France has been pursuing an initiative to defuse tensions in the Gulf, and French officials said Zarif’s sudden appearance was a continuation of those efforts. They insisted Trump had been informed of the unexpected arrival. The US president refused to comment.

Next year it will be Trump’s turn to choose outside guests as he takes his turn at hosting the G7 against the backdrop of his re-election campaign. European diplomats on Sunday were betting that Putin would be on top of his list.

Coronavirus and sex: What you need to know