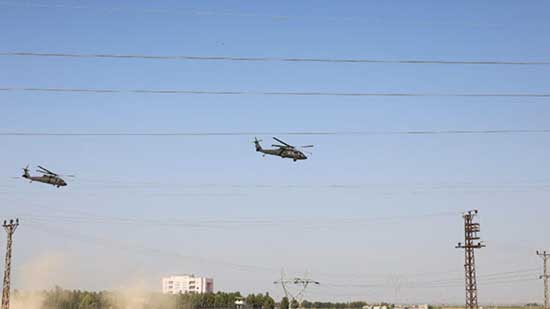 Spokesman Sean Robertson told Anadolu Agency that two generals, one from each country, flew on the same helicopter on Aug. 24.

This “milestone” followed establishment of the joint coordination center earlier this week, Robertson said in an e-mailed statement.

The first joint helicopter flight between the two NATO allies allows the coalition and U.S.’s partners to “remain focused on achieving the enduring defeat of ISIS,” the statement added.

Field applications of the first phase started,” said Akar in the Aegean province İzmir, adding that the first joint helicopter flight between the two NATO allies would be taking place in the afternoon.

“In addition, the destruction of terrorist emplacements and fortifications began,” Akar stressed.

Akar said a safe zone east of the Euphrates River in Syria should be established within the framework of the principles set out in the calendar without delay.

Akar and Esper also agreed that military delegations from the two countries will meet in Ankara soon to discuss the next stages of the safe zone plan, it said.

Turkish and U.S. military officials on Aug. 7 agreed to set up a safe zone and develop a peace corridor to facilitate the movement of displaced Syrians, who seek to return their home. They also agreed to establish a joint operation center.

The agreement also envisaged to set up the necessary security measures to address Turkey’s security concerns.

Referring to the Turkish cross-border operations, Akar said a total of 654 terrorists were neutralized over the last eight months in northern Iraq.

He added that Operation Claw 3, launched on Friday in the Sinat-Haftanin region, continued successfully.

Referring to Turkish observation posts in Idlib in northwestern Syria, Akar underlined that Turkey would use its right of self defense in full if an attack were to occur on Turkish observatory posts and presence in the region.

Turkey and Russia agreed last September to turn Idlib into a de-escalation zone where acts of aggression are expressly prohibited.

The Syrian regime and its allies, however, have consistently broken the terms of the cease-fire, launching frequent attacks inside the zone.

The de-escalation zone is currently home to some 4 million civilians, including hundreds of thousands displaced in recent years by regime forces from throughout the war-weary country.