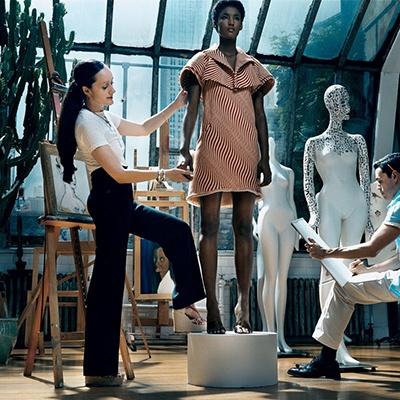 Isabel and Ruben Toledo, with model Sessilee Lopez, in their New York studio

Isabel Toledo, the independent New York designer, has died. The cause was breast cancer.

Toledo was born in Cuba in 1961 and immigrated to West New York, New Jersey, as a teenager. She was a seamstress from an early age and attended the Fashion Institute of Technology and Parsons School of Design. Not long after she left school (she never graduated), she presented her first collection, in 1985. Her earliest supporters were Fiorucci and Bergdorf Goodman.

Toledo quickly made a name for herself in fashion circles with her focus on craft. A “designer’s designer,” she rejected themes and far-flung inspirations; instead she let fabric and material guide her, draping in ingenious, elegant ways. “I really love the technique of sewing more than anything else…the seamstress is the one who knows fashion from the inside,” she said in a 1989 interview. “That’s the art form really, not fashion design, but the technique of how it’s done.”

In the late ’90s, Toledo also rejected the runway, presenting new collections in museums. Though she stepped far out of the mainstream, she stayed top of mind among her industry peers. “I admire her technique, her individuality, and her incredible eye. Her clothes are always right,” Narciso Rodriguez told Vogue in 2003. Demi Moore, Debi Mazar, and Debra Messing would no doubt agree; all of them wore Toledo’s creations on the red carpet.

Toledo was briefly the creative director of Anne Klein and participated in the 2005 CFDA/Vogue Fashion Fund Award, but her claim to fame is the outfit she designed for First Lady Michelle Obama to wear to her husband Barack Obama’s inauguration in 2009, a discreetly chic lemongrass yellow wool lace shift dress with matching overcoat.

Isabel and her husband Ruben, an artist, were collaborators—and one of New York’s most original duos—for four decades. (In fact they were born in Cuba a year and a day apart, and met in high school in New Jersey.) Together they won the Cooper Hewitt National Design Award for their work in fashion in 2005. Their most recent project was an exhibition at the Detroit Institute of Arts (DIA). A showcase for the relationship between fashion and art, Labor of Love was an installation of new sculptures, paintings, and drawings that they created together, using the DIA’s collection as inspiration. The centerpiece was Synthetic Cloud, a series of dresses sewn by Isabel from layer upon layer of tulle; the sky blue, hot pink, orange, lavender, and neon green colors of which talked to nearby pieces by Donald Judd and Frank Stella.

“I’m really a forever kind of gal,” Toledo told Vogue in 2005, when she was a CVFF finalist. “If everybody’s going this way, I’m going to figure out how to go that way.”